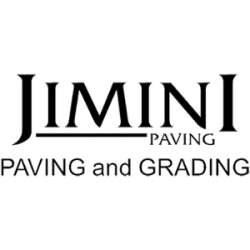 Jimini Paving is a family-owned and operated business that has been providing affordable paving services since 1985. We are a full-service contractor specializing in residential and commercial asphalt laying. We offer asphalt cutting, repairs, seal coating, patchwork, and all forms of road and parking lot maintenance. We are your one-stop source for all asphalt paving needs. Jimini Paving is committed to providing the highest-quality customer service and craftsmanship. As an asphalt paving company, we understand the importance of choosing the right materials and giving our customers the long-lasting paving they need. We are committed to providing the very best service at a budget-friendly price.

What is the phone number for Jimini Paving?

What is the internet address for Jimini Paving?

How big is Jimini Paving?

What days are Jimini Paving open?

How is Jimini Paving rated?

Jimini Paving has a 4.5 Star Rating from 10 reviewers.

Had Jimini pave our driveway and it looks spectacular, they did a great job.

I contacted Jimini Paving for an estimate via email. Kayla, the office personnel, contacted me back stating Jim is out of town and Randy would call me to schedule to come out and price out my paving project. Randy said he would be out that same week between Wednesday and Friday. With the weather being bad Randy was unsure which day he could be here. Friday comes, Randy called and said he would be out Monday. Monday came and went and Randy did not come out or even have the consideration to call. After two more days went by I sent Jim an email advising his estimator Randy has not come out or called. Randy happened to call my cell phone that same day looking for some other person. Unfortunately I missed Randy’s call, listened to Randy’s voice mail and called Randy back. I wound up leaving Randy a voice message explaining I was the person he no showed, not the person he called my number looking for. Few more days go by and I send Jim a fallow up email letting him know how disappointed I am with the lack of response or consideration I have received from Jim, his office staff and of course Randy. It’s bad enough to treat anyone with such disregard, especially a repeat customer such as my wife and I. If you are looking for someone to take care of your paving project you might want to look somewhere else so you’re not disrespected in this fashion either. Plenty of companies out there that actually want to take care of business- no one needs this kind of treatment.

Very happy with the whole project from estimate to completion and beyond. Jim is great and the crew are artists. Price competitive, quality superior.