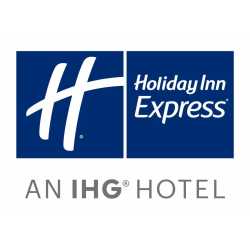 Stay Smart at Our Cheney HotelYou'll find the comfort and convenience you need at our Holiday Inn Express Cheney, WA hotel, one of the leading hotels near the Spokane International Airport. Our hotel's located at the corner of Betz Rd and Hwy 904, minutes from the Eastern Washington University and near many businesses and attractions. We have reasonable rates and a name you can trust.Thoughtfully designed for the most distinguished business traveler, our hotel has free Wi-Fi access, a 24-hour Business Center, and 2000 sq ft of banquet space. With a location near Fairchild Air Force Base, Amazon Fulfillment Center, Northern Quest Casino, and Caterpiller, the Holiday Inn Express Cheney, WA is the best place to stay near the Spokane International Airport.Our hotel's perfect for families as we are close to many area attractions including the Turnbull Wildlife Refuge & the John A. Finch Arboretum. Spend a day golfing at Fairways Golf Course or cheering on the Eagles at an Eastern Washington University football game. We offer an array of complimentary amenities to guarantee an amazing stay including: a complimentary shuttle within a 7 mile radius (24 hour advanced notice required), a hot breakfast bar buffet, 24-hour fitness center, and indoor heated pool and spa. You'll find quality, contemporary accommodations when staying with us, so make your reservation today at our Holiday Inn Express Cheney, WA hotel!

What is the phone number for Holiday Inn Express & Suites Cheney, an IHG Hotel?

What is the internet address for Holiday Inn Express & Suites Cheney, an IHG Hotel?

-1 star rating here. Rude staff that addressed my 8 year old son with animosity. Room was only slightly cleaner than the pool area which was absolutely disgusting. The pool area remained untouched the entire weekend and was covered in human hair and filth. The breakfast servers did not wear any kind of hair nets or hats nor did they attempt to put there hair up in a manner suitable for food prep or service. The whole place is just a mess with grown children for employees. Never again. If there were the option to give a score of -1 I definitely would.

We arrived in cheney about a hour early, when we asked if we could check in early we had a appointment and would not be in town till late that night we wanted to change and freshen up, the gal at front desk was very rude. The hotel had maybe a couple cars it was not busy. She said we could not check in early, and if we were able too there would be a $40 early check in fee for one hour, she had a attitude with us, and all we did was ask a question, we told her that we'd most likely find another hotel that treated their guests better. About a hour later the manager called and left me a voice message saying that if we cancelled I will still be charged full price for hotel. We came back later that night and the manager came out, and had to make it clear that if we wanted to check in early that their was a fee, I understand that yes they have procedures, but they were not even busy what happened to hospitality. I only ever stay at holiday inn expresses for as long as I can remember and never was treated rudely like that. We paid for room but did not stay there. I will not recommend them to anyone in area.

Never again will I stay at this hotel or a holiday inn again. We booked a room and accidentally picked the wrong date. Which we missed because it was sooner than the date we anticipated. The hotel did nothing to help us with this. They took our money and made us pay again for the night we tried checking in. No refunds is what we were told. Are you kidding me? Not even a courtesy call about our missed date or anything. They just took the money and could care less. Although ourbstay was pleasant the staff was terrible and useless. All they seemed to care about was money.

After being told we were able to bring pets, we had to cancel our room because we had our cat with us. The people were amazing about it, but we lost our entire room charge. After driving for 8 hours to find out we had nowhere to sleep, it was not pleasurable.

nice but not helpful