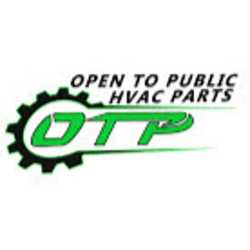 We are an HVAC (Heating, Ventilation, Air Conditioning) parts supply house that caters to individuals who need to purchase air conditioning parts and equipment to repair their HVAC systems. At Open To Public HVAC Parts we aim to be your premier Dallas HVAC parts supplier. We have a large inventory of repair parts, installation supplies, and readily orderable equipment. We are proud to serve our local communities, neighbors, businesses, and homeowners nearby that have do-it-yourself attitudes. We can also test many parts at our counter; relays, contactors, sequencers, control boards, motors, fan blades, ignitors, capacitors. Almost every part comes with a one year manufacturer warranty against defects, and can be warrantied in-store.

What is the phone number for Open To Public HVAC Parts?

Where is Open To Public HVAC Parts located?

What is the internet address for Open To Public HVAC Parts?

The website (URL) for Open To Public HVAC Parts is: https://otp-hvac.com/

What days are Open To Public HVAC Parts open?

How is Open To Public HVAC Parts rated?

Open To Public HVAC Parts has a 4.9 Star Rating from 146 reviewers.

The blower wheel on my older carrier system woke me up in the middle of the night because it finally became sufficiently unbalanced (although, by the looks of it, should have been replaced years ago.) After an online search, I found out of town sources that could have been received in 5 days but saw Open to the Public as a possible source so waited until they opened at 7:30AM.
I gave the man who answered the part number and he gave me the option of a slightly different part in stock that might have worked or the OEM part from Carrier available between 2-3. Although the OEM part was more expensive, I opted for that although, in retrospect, would have probably have saved money by bringing the blower assembly in to check fit.
They texted at 1:00 and I had my part 20 minutes later.
Great knowledge and service, very happy I called.

I called to check for a part close to closing time, arrived a few minutes before and they took the time to explain the difference between the replacement and the OEM wiring on the fan motor I needed, cut the drive shaft down for me, and generally made sure I had no questions before leaving... All this on a Saturday, after they had shut the neon lights off. I can't thank them enough, I will always use them from now on and recommend you do also. The absolute best in knowledge and customer service! Thank you OTP!

You can get all of your HVAC needs here. The staff is very friendly and knowledgeable of the equipment. You can spot great customer service here, anytime 💪🇺🇸

Highly recommend excellent service. For sure I will come back !! perfect place!!!