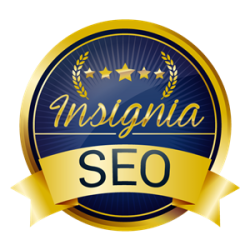 Insignia SEO & Web Design in Austin is a National SEO & Web Design Company with various offices in Texas. They have been helping businesses with Digital Marketing and Website Design since 2013. They have blazing trails in the internet marketing industry and changing the way companies gain visibility online. While their services started locally as a professional Austin SEO Company, their service offerings have expanded past the local marketplace. They are an agency with experts and consultants that have years upon years of experience in Advertising, Digital Marketing, Branding, Conversion Funnels, Website Development, E-commerce, Social Media Marketing, AdWords Advertising and a lot more. Their primary objective is to help small to medium companies scale.

Where is Insignia SEO located?

How big is Insignia SEO?

What days are Insignia SEO open?

How is Insignia SEO rated?

Insignia SEO has a 4.7 Star Rating from 40 reviewers.

I must say when I first came across this company there reviews were outstanding, and that's what drew me to them initially. I first went the SEO route for several months. But did not get any type of leads through that avenue. A few months after, I decided to try the social media route. The representative sold me the farm, and made a verbal promise that within 30-45 days I would have a minimum of 20 leads, which never happened. They at first changed my website to having content, but then for some odd reason they switched that out, with no reasoning. Over the next few months they did not produce any leads. I eventually found out the only people that were seeing my ads, were the people that only liked my business page. They kept claiming they had done 100's of campaigns and were successful. But, this time they failed in every way you could imagine. The social media manager did not have any originality nor was creative with my ads. They were using basic Facebook ads from canva and adobe spark. Those ads have been over used to where they are not effective these days. They were trying to have me avoid any unnecessary calls, which did not make any sense. Everything you would want a marketing company do to ensure you are successful, they did the complete opposite. They did not know where to target the audience, I needed them to reach. They were just throwing things together, and throwing them against the wall,hoping it would stick. Since I was with them for several months with zero results, I asked for some type of refund. They claimed they don't give refunds. Eventually I had enough of their lies, and they're ineffective ways of advertising and gave them my 30-day notice. They eventually offered to run ads at no charge for me. I rejected that because I told them what makes you think an ad you are not charging for me will work, when you were charging me for ads and they couldn't hit the side of a barn. People I am just stating facts. Please do not use this company for your digital marketing. This company will not get you any results. You're better off doing your own digital marketing and advertising. Will save you the stress and headaches at night. I even asked his company where did you get your five-star reviews, from your family members and friends. Eventually I found out that my keywords that companies are looking for, are not even found on my website which they never added them to the website. The website they re-did for me was cluttered, and the words were all over the place. There was no phone number on my website. I also found out that no companies knew who I was, and I wasn't even ranked on the 7th or 8th page.Please do not choose this company!!!!!! Just wanted to give my honest assessment and review for this company. They kept claiming they knew what they were doing, and they had all this success. Do not believe it, in all honesty folks. Thank you and have a good day.

Excellent company for Google PPC management. Our processes are streamlined. The reports are dialed in for actionable decision-making. We are now making data-driven decisions to grow sales.

My partner and I run a pet store here in Austin and we initially hired Insignia to help us rank better in local searches on maps. They suggested selling our pet products online and now we have increased sales by 50%. It's really exciting to see our business grow this way.