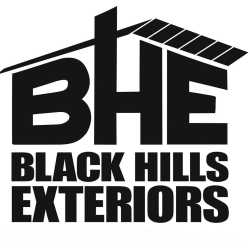 Black Hills Exteriors can provide complete roofing services for your residence or commercial project throughout the Black Hills Area. Our commitment to quality, continuing education and a dedicated customer service team, brings Black Hills Exteriors to consistently deliver the best roofing system available in today's market.Eliminate all the items on your to-do list by calling the experts at Black Hills Exteriors. You'll be glad you did. We have many years of experience and work hard to make sure the job is done right while saving you time, money, and aggravation. We'll be there whenever you need us.

What is the phone number for Black Hills Exteriors LLC?

Black Hills Exteriors LLC has a 4.6 Star Rating from 10 reviewers.

I hired this company to replace my roof, gutters, and siding; and to re-stain my decks, and replace my doors. They set up a time to start and did the work fast and efficiently. I paid them as the money from the insurance company arrived. The issue is with the mistakes.
Shortly after the initial work was done, the contractor I was working with left the company and I was assigned a new contractor. This contractor called once and left a voicemail stating he is my new contact. I tried contacting him through text and calls, but he never did respond. I tried calling, emailing, and going to the office to try and get these mistakes corrected, but only 1 out of 3 have been fixed. It has been about 3.5 months since the mistakes were made.
When they replaced the front door, I also had them replace the screen door. When installing the handle for the screen door, I told them it was too low. I told them this before any holes were drilled or marks made. They never changed the height of the handle before installing it. It took them about 2 months to install a new screen door with a reasonable height placed handle.
My back screen door worked before I replaced the door. I bought a door, because the previous one was broken, that was the exact size told to me by the first contractor. Now the screen door keeps getting jammed shut which makes it hard to open. They half attempted to fix it once. This can be considered a fire hazard/risk because it is the only other entrance to the house besides the front door.
Another issue is that from the front of my house, it appears the left side shingles are coming up. I have been asking them about this for a few months and still have heard nothing from them to know if it is just an illusion. They haven’t been out here to fix it, if needed, either.
Edit: The year after this, another hailstorm hit. They were fast on replacing what they could after they saw my above review. But they were also supposed to replace a window. They just replaced it about 1 year 3 months after the second hailstorm.
I kept trying to call to find out what was going on with the window throughout the year and kept getting the response "I/We will call you back." I don't mind that, but they never called me back. If they were having trouble getting windows in due to the shortages Covid-19 caused, they should have just told me instead of ignoring me.
Needless to say, I will never go back to them again. Even if the work is within the warranty, I will go to someone else. Services: Gutter repair, Roof repair, Storm/wind damage roof repair

From the onset, BHE did a fantastic job. Rory, our sales man went over everything in great detail. He handled the entire claim for us including an insurance supplement as our claim amount was considerably low. He made sure every detail that needed repair was included in our claim and communicated on a regular basis with us while getting everything set up. The crews that came out did a fantastic job. The roof and gutters were done quickly. But specifically, Ethan Danley and Mike Stoneberger did an amazing job handling the siding on our home. From start to finish they were very professional, communicated well and took care of our home like it was their own. They went above and beyond on several details during the process and made sure our home came out looking like the best on the block! It was a pleasure working with them and everyone at BHE throughout the process. I would highly recommend getting ahold of them if you have any exterior repairs needing to be done! Services: Gutter installation, Storm/wind damage roof repair

The crew that came to work on our home was on time, did the work in a timely fashion, and with the skill expected in a company hired to do the work. Greg B. was especially thorough in his part of project cleaning up and inspection of the final project.