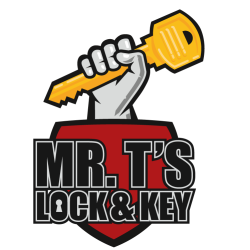 Mr T's Lock and Key is new england most trusted locksmiths, we are local locksmith company that provides services for the rhode island and massachusetts area. we can handle all of your locksmith and security needs, we offer a large variety of locksmith services such as the installations of locks for home, bussnises, car keys , high security locks , safes, emergency lockout service, emergency automotive services, car keys repair , smart keys for cars , garage door installation and much more.

What is the phone number for Mr. T’s Lock & Key?

So I needed a key cut and programmed for my truck and called Mr. Tâ€ťs, they were very nice on the phone and scheduled a time to come out and accommodate me, they said they would be there between 9 and 11 which turned to 1 and 3 which turned to a little after 3 which turned into 5 pm, no problem, I understand people are busy, the technician showed up and was helpful and polite like the person that I dealt with on the phone, he cut the key and attempted to program it but was having trouble getting it done, we were unable to get the truck started but he was confident that the key was properly programmed and I told him I would jump start the truck later, when I tried to jump start it the truck would not start because the anti theft system would not recognize the new key. I called the shop today and spoke with someone who identified as the owner who was very rude and unhelpful, he said they would not come back out to program the key for which I had paid for in cash and given the tech a generous tip for being so nice and polite, the tech said if there were any problems they would come back out and take care of it. My experience up until today was positive and everyone I spoke with was polite and helpful, however today that was not the case, if the gentleman I spoke with today is in fact the owner he should let his employees run his business as he was rude rude and condescending. When I told him I would contact the Better Businesses Bureau he said â€śgood luck with that â€ś. EXTREMELY unprofessional and I will pursue legal action !