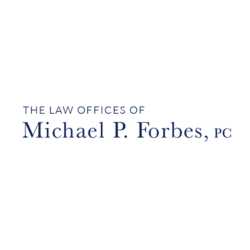 At the Law Office of Michael P. Forbes, PC, we understand how trying it can be to struggle under a pile of mounting debt. What we do not understand, however, is why a debt collector would ever violate an individuals rights by illegally harassing them at all hours of the day with threatening phone calls. For this reason, our firm has dedicated our practice to defending the victims of debt collector abuse, as well as to helping them fight back. If you have been unlawfully harassed by a collection agency, do not hesitate to enlist the help of an attorney from our firm immediately.

What is the phone number for Law Office of Michael P. Forbes, PC?

Where is Law Office of Michael P. Forbes, PC located?

What is the internet address for Law Office of Michael P. Forbes, PC?

The website (URL) for Law Office of Michael P. Forbes, PC is: http://www.mforbeslaw.com

How big is Law Office of Michael P. Forbes, PC?

How is Law Office of Michael P. Forbes, PC rated?

Law Office of Michael P. Forbes, PC has a 5.0 Star Rating from 5 reviewers.

I am a previous client of Michael Forbes and was just looking him up to contact him again because I am $15 grand into my current lawyer and left desperate to get some legal advice from the only attorney I can say that I trust, even though it is not in his area of pratice. I happened to see this review and simply want to leave my personal experience and opinion of not only his handling of my case but on a personal level.
I had contacted at least 50 attorneys to represent me and every single one hung up after I asked if they had any flexibility on the normally large retainer expected or alternative financial arrangements for payment. Most did not even listen to the outrageous events surrounding my case. I called Michaels office and spoke with Nancy, she was so kind and listened to me and genuinely cared about what I was saying. Nancy was fantastic and made me feel like she had nothing to do but listen to me, she told me Michael was busy and would have him call me back. Which he did, and he was a bit more quick on the phone, slightly less interested in the emotional parts that although, I felt the need to include, he knew they had no impact either way legally speaking. My case was by no means something to build a legal career on , or even add to a list of accolades for that matter - it was actually a miniscule little case in the grand scheme of thigs but he agreed to help me. So the screening process the last review suggest is not at all factual. He and I had numerous conversations over the 2 years he fought for me- ending with a resounding win- we butted heads sometimes over the phone because of his time constraints and slightly strong demeanor. With that said I try to be very understanding of the other persons view. I have come to realize how much he taught me over the course of all them phone calls, when I learned to listen that is.....lol. The fact you got a call back from any lawyer in a ten minute time frame should have been an indication of the caliber person he is. He is all about business and is looking to maximize his available time in order to serve his clients. To fault a lawyer for them characteristics is a mistake, trust me! So when calls and emails were not returned in a timely fashion - I would follow up and if still not returned - I would follow up again. No matter the rate of call or email exchange that I may have wanted , The fact is he always called, emailed when it was most important. I learned something that is a still a core part of how I live to this day. Most times offense is taken and not given. If you want a lawyer that has the time to talk at your every whim - your not looking for a good lawyer. You want a no nonsense, no time wasted, effective lawyer- then look no further.

Michael is not only a stand-up guy but also a great attorney. Call Michael P. Forbes, PC if you are in need of a competent and experienced attorney.