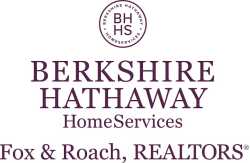 What is the phone number for Berkshire Hathaway HomeServices Fox & Roach?

What is the internet address for Berkshire Hathaway HomeServices Fox & Roach?

I am 70 years old and feel this is the worst experience buying or selling a house. I was conned into choosing this firm with promises never expected to keep. Norm made decisions on things he didn't like or feel important without consulting me at all. I had to give him an ultimatum not to do anything without my permission. I lost a potential buyer because he told them I was selling because it was too much work. He talked me into accepting a low ball offer because we hadn't received any offers for months due to his lack of direction in how to price the property. His write ups are inaccurate. He spends hours talking and not listening. Now with closing I learned that agreeing under pressure to accept a contingency of the buyer selling their property I am dependent on "their" buyer's financing which has postponed the closing way after I agreed was acceptable. His deception and dishonesty has cost me an additional 6k besides having accepted a low ball offer and losing my good credit score due to owning 2 houses while living on social security. I ended up being trapped. I had another realtor lined up to take over a month ago, but he whined so loud I agreed until the end of July. He originally told me the company paid all their expenses, but suddenly now he was out $450 for photos. Which is the truth? It is now the end of August. He agreed my house would remain on the market while the buyer was getting their finances, however it went from 3-4 showings a week to none since the date I signed the sale pending agreement 2 months ago. Now suddenly this man who talked my ear off doesn't respond now that I have confronted him and am angry. I wonder how Warren Buffet would respond to these practices?

Absolutely loved doing business with this company. The people were wonderful and incredibly helpful.

John Anderson made the transaction as smooth as possible. Highly recommend him for your real estate needs.

Helped find the perfect apartment for me. They always stayed in contact and kept me updated.