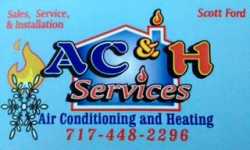 We are a family owned and operated Service , installation and sales of mots brands of heating and cooling equipment. We offer great customer service and a warranty on all work completed by us. Feel free to give us a call for a FREE estimate ! To better serve the community we also do text messaging for those hard of hearing or deaf.

What is the phone number for AC & H Services?

Where is AC & H Services located?

What is the internet address for AC & H Services?

The website (URL) for AC & H Services is: http://www.achservices.co

How big is AC & H Services?

How is AC & H Services rated?

Scott was great and easy to work with, he was able to accommodate our schedule and installed a new ac unit just as a heat wave was starting. He even took the time to follow up to make sure everything was working as expected.

AC&H is truly the Best of the Best!
I have hired AC&H multiple times over the past 10 years for several residential HVAC matters. Scott has been absolutely amazing across the board. He is an honest and trustworthy man who knows his profession very well. I have spent over $70,000 with multiple service providers over the past several years including Roofers, Carpenters, Plumbers, Painters, Home Remodeling, and other HVAC companies and I can honestly say that AC&H/Scott is the only company/person I would and have recommended to my friends and family.
So why should you use AC&H?
• Professional
• Honest
• Reliable
• He has never once tried to up sell me
• Extremely reasonable pricing
• He is always able to be reached
Most notifiable experiences when using AC&H (Scott):
1- On the hottest day of the year in 2011 my outdoor unit stopped working. This happened on the Fourth of July weekend. I called multiple places and not a single person returned my call. So I finally called the company with the least number of online reviews “all positive reviews” which was AC&H. Much to my surprise a person answered the phone and it was Scott. I explained the circumstances and he pretty much knew what the issue was; however, he was driving to a family picnic but he would swing in real quick. He showed up 10 minutes later and fixed the issue which was a blown capacitor in the outdoor unit.
2- I made the mistake of using other HVAC company to install a new HVAC system in my home because I was sold on the BRAND “Trane” and they were one of the few authorized provides for that brand. Unfortunately my experience with that company was terrible respective to the quality of work during the install. So I decided to hire a professional to inspect their work, however, after calling two other Trane dealers I was disappointed to learn that most companies are not willing to inspect a new system installed by another company. I felt guilty about not using AC&H so I was hesitant to call Scott, but he was the only person I truly trusted. I called him and explained the circumstances and that same day he showed up to inspect their work. Scott was totally professional and he never once made me feel awkward for not using him.
3- Recently a friend of mine was having issues with her Oil Furnace which was causing it not to work. I reached out to Scott on her behalf. Scott offered to swing by that same day, but due to her schedule she would not be able to meet until the next day. Scott called her prior to arriving the next day, he showed up, and had to bleed the tank. The most amazing thing which is absolutely unheard of these days is that Scott did not charge her a dime. He said that they were driving back through her way anyway plus it was a quick fix. That right there in my mind further proves without any doubt why AC&H is the company to use ALWAYS. Services: Heating maintenance, HVAC maintenance, Repair heating system, AC maintenance, Repair HVAC