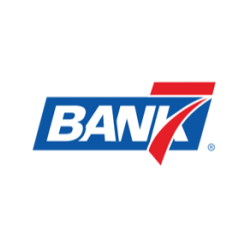 Bank7 is an Oklahoma based organization operating nine locations in Oklahoma, Texas, and Kansas with assets of over $1 billion. Bank7 is listed on Nasdaq under the symbol of BSVN and is consistently highly ranked by S & P Global Market Intelligence as a Top performing community bank in the U.S. with assets under $3 billion.

What is the phone number for Bank7?

Where is Bank7 located?

What is the internet address for Bank7?

What days are Bank7 open?

How is Bank7 rated?

Had a bank account here for many years and I have to say this is the worst bank I've ever had in my life.

I liked banking here at first, and when I was opening up a bank account I was told there are service fees if I didn’t use my debit card 10 times a month or deposit at least $1500 into my checking account. Well, I was a high schooler with a part time job, and the $1500 a month was never going to happen. I never really had problems with this bank until recently. I used my card 10 times this past month and it showed on my bank account that I did, but I was still charged a service fee of $15. I went to go see why on the app. It’s because they changed it to show that they charged the service fee on September 13, when it wasn’t there originally around 9pm that night, because I checked before I went out to use my card for the 10th time. They changed where I used my card for the 10th time that night to the next Monday, which would’ve been the 16th I believe. And the transaction was shown on my card on Friday that it was pending, but then magically changed to pending on Monday, and then a service fee magically appeared Friday when there was never one. I now bank at a bank closer to where I live where it doesn’t charge any fees at all, and it is wonderful. I don’t recommend bank 7 to any teenager or anyone that makes less than $1500 a month, because those service fees are absolutely ridiculous.