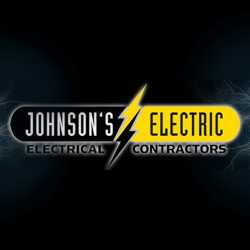 Johnsons Electric Service is a family-owned and operated company that has been in business since 1948. Were dedicated to providing world-class electrical services to you, our neighbors in the Lawton area and we show our dedication to our customers with every job we do.All of our employees are trained professionals who are thoroughly background checked and drug tested to ensure that you receive only the best service in central Oklahoma. Our technicians take care to make sure that your home is just as clean when they leave as it was when they arrived, wearing shoe covers and using floor protection so that theres never a mess left behind for you to clean up, no matter how large or small of a job it is. Our employees are also ready and able to courteously and knowledgeably answer any questions that you may have about our services.

Where is Johnson's Electric Service located?

How big is Johnson's Electric Service?

How is Johnson's Electric Service rated?

Johnson's Electric Service has a 4.2 Star Rating from 17 reviewers.

I had a fuze panel box replacement.My wife and I were very please with the professional job performed by Mike.He was very curious and explained to us the work being done.I would recommend Johnson's electric especially with pros. Like Mike.Thanks.

We were having problems with our breaker. They came out, barely assessed the situation before determining it was the circuit breakers that needed changed. Each breaker was $120 each so they said. I checked home depot and they were only $30/each. The same day, the breaker continued to flip in the bedroom. We called them, they sent someone out the next day. They found a 1cm piece of extra ground wire. They said it was that and the wires were too close together. They billed us again. A few days later the breakers flipped again in the same location. I called, the receptionist was rude and unprofessional despite me being polite. I was straightforward in telling her we paid $600 so far for the same problem to be fixed. I wanted them to come out and fix it without getting a bill. She said they would send someone out, when I clarified that I wanted a guarantee that we would not get an invoice, she said we will have to play it by ear. I declined , saying I would get someone who was competent and could get the job done right the first time. I'm not paying another bill for them to come out and keep guessing what the problem is. Do not hire, they are incompetent and overcharge for parts and services not rendered.