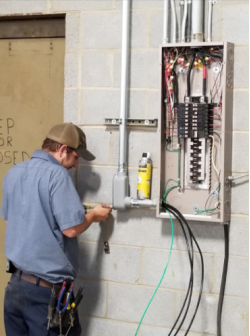 Keep your home safe and energy-efficient with Wiretech Company's complete range of residential electrical services, repairs, and upgrades. We offer a variety of residential services in Raleigh, North Carolina, including electrical repair, TV and appliance wiring, lighting installation and repair, and installation for electric car chargers. We provide fair and honest electrical services and are focused on high-quality work and building great customer relationships. If you live in Raleigh or the surrounding areas, trust the experienced and caring team at Wiretech Company. Call us today or visit our website to request an electrician for your home!

What is the phone number for Wiretech Company?

Where is Wiretech Company located?

What is the internet address for Wiretech Company?

What days are Wiretech Company open?

How is Wiretech Company rated?

Wiretech Company has a 4.2 Star Rating from 25 reviewers.

Beware.
We contacted this company for an EV charger install. The job was paid for through my company. I will say that everyone with the company was very nice, but the end result is an absolute aesthetic disaster (see picture). I was assured by the person giving the estimate that the project would be visually acceptable. I would argue that running a line across your front door (and the entire front of the house) is an absolute non-starter and should not have been suggested in the first place. Would you want this (see picture) across your front door? Multiple neighbors have commented on it and the work has become a bit of a joke in our neighborhood.
On the day of the install, when it became apparent what the end product would look like, my Wife and I asked if they could bury the line. The installers replied that they do this type of work all the time and that it would not be a problem but that it would cost an additional 2-3K. Furthermore, they said that they couldn't change the plan once it had been submitted to the city as the inspector would approve the plan as written. The inspector came, and it was approved.
The end result was that the installers assured me that they would call me back to arrange burying the line. We are now ~ 6 weeks post install and I have not heard anything from the company. If 2-3K additional funds will be required for a reasonable aesthetic result, the company should be upfront about that. We would not have agreed to the work if we knew that the end result would be such an eyesore.
Again, everyone with the company was very nice but the end result is really problematic. I would appreciate an effort from the company to make this right. I am happy to amend the review if an acceptable solution can be reached. Service: Electric car charger installation

Easy to schedule appointment. Electrician arrived on time and was easy to talk to about our situation. Completed the work around our kids needing internet for school (couldn’t cut the power). Will use again.

Our EV wall charger was installed by David from Wiretech. He was prompt, carefully explained the process and was extremely professional. We had an excellent experience with him and Wiretech.