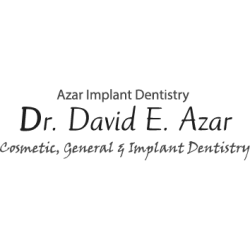 Welcome to Dr David Azar's office where we treat you, not just your teeth. Our philosophy is very simple, "we treat our patients the way we would want to be treated," in a clean, comfortable, and safe environment. Dr Azar has a 99% on time appointment record, and a "One patient at a time approach". Dr David Azar makes sure to give each patient the individual care and attention they require. Most people's teeth are the same as everyone else's, but each person is an individual and at Dr David Azar's office treatment is tailored to You, the individual. Dr David Azar can provide all your dental care under one roof, from a routine cleaning to a full mouth rehabilitation. Dr Azar has vast training in all modern dental treatments including the use of the most up-to-date digital technology. Digital Radiography, Intra-Oral photography, Radio-surgery, Piezo-Surgery, 3D Computerized Scans, and CAD-CAM dentistry are just some of the modalities that Dr Azar employs. Dr Azar is proficient in Restorative Dentistry, Periodontal Plastic Surgery, Adult Orthodontics, Endodontics (Root Canal Therapy) and all aspects of Implant Dentistry. You rarely have to go anywhere else to receive your treatment.

What is the phone number for David E. Azar, DDS?

What is the internet address for David E. Azar, DDS?

The website (URL) for David E. Azar, DDS is: https://www.drdavidazar.com/index.html

If I could give him 10 Stars I would! He’s skilled at what he does and a great guy once you get to know him. I’ve been seeing Dr. Azar for 20years now, yes 20. I have never been disappointed. Honestly I won’t list all the dental work that he’s done on me but let’s just say it’s not basic dental work and I’m so happy that I found him 20years ago. I take my girls to him when they need special work done. He pulled all 4 of my older daughters wisdom teeth, a breeze so quick and painless! Seriously she had no post issues at all. And I’ve heard and seen horror stories. My little will be going to him to have 2 wisdom teeth removed I’m not worried I know it will he just fine as well as the post recovery. I recently had a crown put in I moved to Florida and he came in just for me to put the crown in so I would have to wait till next time I came back to NY. I mean seriously who does that??? A person who cares about his patients. He had to mess with my gums since it was in the upper back and told me your going to feel pain but take Advil to help with it. I was nervous but as always he says that and I I didn’t feel any pain, NONE. A little throbbing but I took Advil and it was fine. I rinsed with warm water and salt like he instructed. Now it’s totally healed no pain! Even though I’ve moved to Florida I will only trust DR AZAR with my major dental work. Im very scared of the dentist so to build that trust again with another I don’t think that’s happening. Skilled hands 🙌

Dr. David Azar and his staff are the best I look forward to my 5 star visits! The office is very clean and I'm always greated with friendly faces and that's a big plus. I am very happy with my implants and I can finally smile and feel confident about myself you have changed MY LIFE!!

Terrified of dentist? That’s me.
I’ve never had a good experience at the dentist, which is a primary reason why I allowed my teeth to deteriorate so badly.
These bad experiences began at childhood. So in my mind a weeks worth of home remedy was better than even an hour at the dentist.
Today I am faced with little choice: Either grow up, be responsible and face the fear, or foolishly suffer unnecessarily.
I found Dr. Azar. I had the first procedure (extractions) completed just yesterday. I experienced the same fears.
However, as it turned out, the fear was unfounded. The after pain - none at all, not even a little bit. The follow up swelling - none. That was surprising. The constant bleeding - none of that either; and I just knew to expect the bleeding as there were multiple extractions.
Moreover, my appointment was at 1:00pm, I arrived late, around 1:30pm. I was back home at around 3:30pm. Close to an hour of that was travel time.
Finding Dr. Azar was tantamount to finding that great mechanic: He won’t cheat you, and he’s highly competent.

Dr Azar and his staff is amazing!!! They treat you just like family. I had a bone grafting done and everything is well right now. I just want to say big thank you to him for his help.