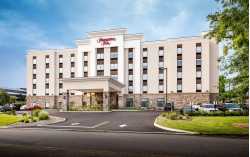 Welcome to Hampton Inn Paramus. Tucked neatly in the Paramus Park Mall, our brand new hotel offers a fantastic central Bergen county location. We are easily accessible from major highways and are within minutes of multiple shopping destinations such as the Garden State Plaza, Riverside Square Mall and Bergen Town Outlets. If you’re here on business, we’re situated next to the Mack-Cali offices on From Road and we’re just minutes from several prominent business such as Movado, ATT and Suez. Take a tour of New York City to see the Empire State Building and Statue of Liberty, or catch a game at the Meadowlands Complex, home of the NY Giants and NY Jets. For outdoor fun, Saddle River Country Park boasts biking trails, tennis courts, a duck pond and more. When it’s time to relax, kick back in your comfortable guest room at Hampton Inn Paramus. Our modern rooms are equipped with complimentary WiFi access, an HDTV and our clean and fresh Hampton bed. Each morning you’ll wake up to fresh waffles and hearty oatmeal at Hampton’s free hot breakfast. If you’re in a hurry, grab a Hampton on the Run Breakfast Bag, available Monday through Friday, as you head out the door. Our Paramus, NJ hotel also features a fitness center, 24-hour business center and a heated indoor pool.

What is the phone number for Hampton Inn Paramus?

Where is Hampton Inn Paramus located?

What is the internet address for Hampton Inn Paramus?

The website (URL) for Hampton Inn Paramus is: https://www.hilton.com/en/hotels/lgafrhx-hampton-paramus/?SEO_id=YEXTN-HX-LGAFRHX&y_source=1_ODYwMjY4OC01NDUtbG9jYXRpb24ud2Vic2l0ZQ%3D%3D

How big is Hampton Inn Paramus?

How is Hampton Inn Paramus rated?

Hampton Inn Paramus has a 4.4 Star Rating from 344 reviewers.

Though this was a special case, I am giving them one star for absolute lack of compassion and bad business practices. I had to stay here while sick with Covid 19, you know, the virus that is currently ruining the entire world. My only choice was to stay in a hotel, or potentially infect and kill the vulnerable people in my household. The hospital's case worker told me that many people were staying in hotels, including medical personnel, to protect their families during this horrible time. I checked in early April and, unbeknownst to me, would find myself living here until the end of the month.
I picked Hampton Inn because it's my favorite hotel chain, or maybe it was, and I know them for their quality and comfort--which I felt I could use while trying to fight this. I figured I would be there for about a week, but it turned into three+. I was incredibly ill, and became more ill while there. I wound up getting pneumonia from the virus, and though I wasn't qualified to be admitted to the overwhelmed hospital, I was being monitored for teetering on the brink of respiratory failure. I started getting better, thankfully, but had to remain in isolation until the health department deemed me a non-contagion.
I did not move from that room for over twenty days, most of them I was sick as a dog. The hotel was not functioning as usual, as they were taking extreme precautions (which is good and I thank them) with housekeeping, so there wasn't any. What they did was leave large bags of toiletries and linens for guests to restock their own rooms, and they would take bags back of the dirtied linens. It was a good system, but maybe even especially because of this, rooms should not have been so expensive.
I asked the manager if he could please do something for me, anything, I was not expecting to get sick or have to flee to a hotel in order to save my family from literally potentially killing them. Zero compassion. Told me I was getting the same deal as, "medical," professionals. I couldn't laugh immediately due to the pneumonia, but I said I hoped they were giving medical staff who needed to keep their families safe FREE rooms. He acted like he was giving me some special deal and I shouldn't tell anyone about it ever because he didn't want people, "taking advantage of him." I couldn't stop rolling my eyes listening to this garbage car salesman speech, but because I had no choice, I said OKAY and remained in isolation in the room. My big huge deal from him? $85 a night instead of $89. No tax taken out, nothing. It still came out to over $100 a night, and per room, since I had to have my mother there taking care of me and also didn't want her to get sick from me. I was also charged for a night that I was told I wouldn't be due to some people screaming and cursing and making incredible noise from 1am to 4am. Cops came multiple times and still, they wouldn't stop, and the front desk treated me as if I was crazy when I called to tell them about it. There it is on my bill, though. They never took it off.
Normally, I am certain this is an okay at best hotel, but during a global crisis, there needs to be WAY more compassion for the displaced. Help the problem and the people instead of causing one and only adding to grief. I am currently paying off $4,800+ of a bill to them for `three weeks, two of which I was barely conscious for. It feels like being punished for being sick. I am currently unemployed with no end in sight, and now I owe this AT LEAST multi-million dollar corporation a huge chunk of my savings. For having to isolate during a GLOBAL PANDEMIC and cleaning my own room for weeks???
I am lucky I'm okay, and will be thankful for that. However, as I watch my limited savings dwindle even quicker from having to pay almost a quarter of them to this hotel, it will haunt me.
In my opinion, TERRIBLE business practice for a loyal customer. Horrible practice for humanity. Be ashamed of yourself, Hampton Inn, Paramus.

Actually, no star if I could do that. Filthy and noisy like a nightmare. Bugs. Prior guest toothpaste spatter all over mirror, clearly not cleaned, couldn’t stomach thinking about what else was not cleaned up in the bathroom. Trash all over corridors. Vile place and we deserve refund for most wretched hotel stay ever.

We stayed for one night and was denied a second do to the fact the the general manager didn't like how my girlfriend spoke to him. She didn't use foul language or was disrespect in any way, we just asked them to stop calling our room being that we work night shift and have already paid. Because of this we were asked to leave the hotel in the middle of Isaias hurricane storm. I will never come back to this hotel, let alone recommend it to anyone.

If i can rate 0 stars i would. Here are the list of issues I had during my recent visit from 9/6/2021 to 9/10/2021.
1. The breakfast is horrible. It tastes fake and additionally it gave me food poisoning. Ended up with diarrhea and vomiting and had to eat bland foods for the following 2 days.
I highly suggest staying away from their free breakfast.
2. There are female workers who haul their kids around the hotel who are still awake and screaming ar 1230 to 2am. The kids are between 2yrs old to 11.
2a. The husbands or family members of the female workers hang around the hotel drinking and smoking at the back of the hotel.
3. The pool was disgusting and dirty.
4. The elevator is extremely slow and dirty as well.
5. On my last day i tried to through a little get together with family for my daughters birthday and a worker came in and "had to vacuum " the area we were in disturbing us and they tried to kick us out as well since our booking stay had ended with the hotel.
Overall i did not have a pleasant stay and would not suggest staying here. Take your money and go elsewhere.