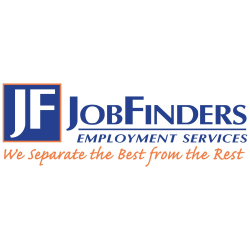 JobFinders Employment Services is one of the most recognized names in staffing throughout Missouri. Our divisions include JobFinders, JF & Associates and JF Medical Brokers. We are dedicated to providing cost-effective staffing solutions to our clients, while affording solid career opportunities to our candidates. We believe integrity, commitment and communication are the key ingredients in our pursuit of “Building Partnerships.” Specialized staffing in manufacturing, distribution, business operations, engineering, call center, medical and administrative services.

What is the phone number for JobFinders Employment Services?

Where is JobFinders Employment Services located?

What is the internet address for JobFinders Employment Services?

How is JobFinders Employment Services rated?

JobFinders Employment Services has a 3.5 Star Rating from 33 reviewers.

Its just a good place to look for a job, fair, @ friendly people, never had any problems with them..

I would not recommend their services. The individual I worked with, who was identified as a lead recruiter, seemed to have very poor communication skills, both in lack of attention to client needs - and in general sending email communications laden with typographical errors, and in the weeks I attempted to work with their agency he failed to get me a single interview to the position to which I applied despite the fact he said in the beginning that they were eager to hire and my scoring over 90% on a test he said all the other previous applicants failed. While I repeatedly expressed a preference for email communication he insisted on calling me, perhaps not wanted to put in writing things he was willing to say, and only secured one interview for a company and position that I had not applied for. Further, he made degrading statements about other applicants and about the business he secured my interview with, and when I asked questions regarding specifics of the position he was never able to provide me with details. I have had more progress in attaining employment on my own, and believe you can too. Look elsewhere.

I loved working with Job Finders, they helped me find work that would work with my schedule, worked fast to find me and had very friendly staff. Mary Kate was especially helpful with answering any questions I had. Thank you!