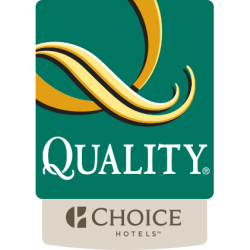 The well-being of guests is top of mind at Choice-branded hotels. Guests may experience a variety of new, improved cleanliness protocols and products. Get more value for your hard-earned money at the non-smoking Quality Inn Branson - Hwy 76 Central in Branson, MO near the Grand Jubilee on historic 76 Country Boulevard, also known as the Branson Strip. We sell discount show and attraction tickets at the front desk to shows like the Dixie Stampede, Silver Dollar City and Legends in Concert. We are two blocks from five restaurants. Shop at Appletree Mall, Branson Landing Shopping Mall and Tanger Outlet Mall. Value-packed amenities include free hot breakfast, free WiFi, an exercise room, guest laundry services, a business center and indoor heated pool. Earn rewards with every stay with our Choice Privileges Rewards program.

What is the phone number for Quality Inn Branson - Hwy 76 Central?

What is the internet address for Quality Inn Branson - Hwy 76 Central?

They didn't get around to cleaning our room. But the room was nice. Breakfast was good. Pool was nice

Checked in and had booked room several months earlier. Upon check in I was told the tax rates changed first of the month and it would be $6 more than I had already paid. Didn't agree but paid it, $6.88. How does the rate change for something you've already paid for? Also had a second room booked. One night on points and one night paid for. Couldn't get the same room for both nights without paying an extra $25ish. Shower head wouldn't stay up, would twist and point to floor. Blocked it up with shampoo bottle. Room was ok but bath could use some maintenance. Key card problems with second room. The usual stuff, had to have recoded. Overall not too bad, just irked me about charges.
Update: partial refund of additional charges was issued. Not full amount but it's not going to break me. I understand price changes but if you're quoted and charged one price it shouldn't change

Stayed two days. The room was very large and clean, we travel with our dog and this was one of the nicest pet rooms we’ve stayed in. The bed was big and comfy, hot breakfast was better than any place we’ve stayed. I have to give a big shout out to the guy at the front desk (wish i had gotten his name!) who was amazingly friendly and helpful. We were considering relocating to the are and he even gave me information on good places to look for rentals for our transition.
The only drawback was that housekeeping kept coming in after we told them we didn’t need anything.

This is the place we always stay! They are definitely taking the time to improve it. We always stay in a room with a jacuzzi tub. The only problem I have ever had was on this visit. Our jacuzzi tub didn't have a drain plug. There was no way of keeping the water in. The only reason we stayed in that room was for the jacuzzi tub. I told front desk on Tuesday our first night and she just said "oh ok." (We just plugged it with a washcloth.) Obviously not a huge issue but just wanted it mentioned. Otherwise it was perfect.