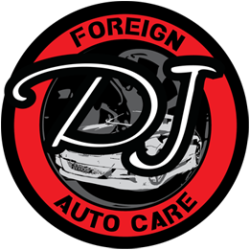 Serving the Twin Cities Metro since 2008, we are a family owned and operated business that specializes in the repair and maintenance of BMW, Mercedes-Benz, Mini Cooper, Land Rover, Jaguar, Saab and other European vehicles. We also work on classic cars. Here is some of what we have to offer: -3 year/36,000 mile nationwide warranty -FREE car wash and local shuttle service -Customer rewards program available -Comfortable waiting area, Wi-Fi, after hours drop-off -We honor extended warranties

What is the phone number for DJ Foreign Auto Care?

What is the internet address for DJ Foreign Auto Care?

The website (URL) for DJ Foreign Auto Care is: http://djforeignautocare.com/

DJ Foreign Auto Care has a 4.5 Star Rating from 209 reviewers.

I recently had my 2012 Mini Cooper towed to DJ Foreign Auto Care because of some issues I was having with the engine overheating and stalling when idle. I wanted to find a repair shop that had expertise in working on Minis, so I chose DJ based on positive reviews over another mechanic that had already told me that it would cost $565 to replace the thermostat (no charge for inspection). Darwin let me know beforehand that it would be $150 to inspect my car and find out what was wrong and I agreed. I let him know that I was already told that I had a coolant leak. When I got the invoice, I was surprised to see 2 $150 charges for the inspection, with his rationale being that the thermostat inspection is an additional charge. I was never informed of this beforehand and had no choice but to accept it. The inspection was thorough and although I wasn’t happy about the extra charge, his estimate to repair the thermostat was lower so I rationalized it would about even out in the end and I was in more competent hands. I got a call the next day saying that the entire thermostat had to be replaced instead of repaired, which would be additional $180+. I already racked up $300 for the inspection(s) and wasn’t in a position to decline service at this point (bait & switch). My car was towed there, and I needed it to be driveable. I told them to go ahead and do it, but declined the replacement of my spark plugs and coils which would have been another $800+ because they charged double for labor on the plugs and coils when it takes the same amount of time to change both. I ended up watching a YouTube video and doing that repair myself with OEM parts for less than $130 total. In the end, my bill was $995 for a thermostat repair that would have cost me less than $600 at a local large competitor. I made a big mistake. DO NOT WASTE YOUR MONEY HERE.
EDIT** they did NOT get my approval for the double inspection cost. The told me it was going to be $150 and got my approval for 1 inspection at that rate. Total authorized was $150 as shown in photos.

Very informative and professional, I was able to get scheduled the same day and they offered me a ride home with there shuttle service. They are my new repair shop for my sprinter van.

Website states they are an Asian specialist, gal on the phone sez, only European. WTH 🤦‍♀️