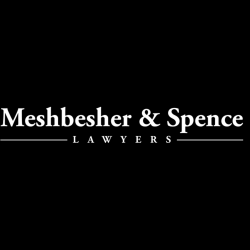 What is the phone number for Meshbesher & Spence?

Where is Meshbesher & Spence located?

How big is Meshbesher & Spence?

How is Meshbesher & Spence rated?

Meshbesher & Spence has a 4.8 Star Rating from 105 reviewers.

A friend of the Family referred us to Meshbesher & Spence for a terrible car accident I was involved in while I was working out of sate. Getting an attorney was the last thing my family was concerned about. My recovery was priority, however what a person doesn't realize is that you cant get the treatment you need because both parties insurance companies just point fingers at each other and you are left in the middle to suffer, financially and medically. An attorney is a must and you could not ask for a better group of attorneys and people to have your back and represent you! The communication and outcome was amazing! Much better than I expected or that we could've ever hoped for. Don't wait, do yourself a favor and call Meshbesher and Spence. You will be glad you did! I cannot thank them enough.....

On November 1, 2019 my wife,Eleanor and I were crossing Boone Avenue to attend a 7:00 p.m. dinner at House of Hope Lutheran Church. After two cars had passed there appeared to be a space for us to cross the street. We had crossed to within a few feet of the of clearing the north bound lane of the street when we were hit by a north bound car. The car had come from a side street and had quickly filled the gap between cars and it hit us. Both of us were taken to North Memorial Medical Center by ambulance.
A New Hope police detective concluded that we were liable for the accident. A State Trooper Sargent later investigated and agreed with the New Hope report.One of our sons-in-law knew Mark Streed and asked him to consider the case. We (my five children and I) met with Mark and Erik Palmer. Erik was taking the active role in representing us and when Mark retired Erik moved forward as the sole attorney. Eleanor died as a result of the accident on November 19, 2019. I was severely injured and spent seven months in hospitals during my recovery.
Erik described steps that he would take in filing a suit against State Farm insurance with whom I had an accident policy. One part of the policy was for coverage for under insured drivers. (At this point State Farm had made an unreasonably low settlement offer.) Erik proposed engaging experts who could reconstruct the accident, measure the street illumination, and comb the car that hit us for clues, among other things. We agreed to pay for the costs of bringing experts into the case. Erik also interviewed accident witnesses. From the evidence that was gathered by Erik's direction there was enough information to contradict the police reports and to strengthen the case against State Farm. The new evidence was presented to State Farm and a mediator was engaged. State Farm refused to budge and appeared willing to delay any further action with the hope that we would agree to accept their earlier offer. Erik was able to push them into responding and they accepted a compromise settlement amount of $200,000 for each of the two claims (The policy coverage was for $250,000 each).
Through the lengthy process of settling the case Erik was unwavering in his confidence that the police reports were wrong and that Eleanor and I were not liable for the accident. I never did think that it was our fault and it means a lot to have that supported. Also, it was satisfying to see Erik take on "Big Insurance" with his dedication and determination. He did not do this with anger but he wanted to see that we were treated justly. This would not have happened without his attention to detail and hard work. As he worked he kept us informed about actions in the case. He came to my house for Zoom sessions when a deposition was taken and during mediation. Things were transparent. My five children liked Erik, understood what he was doing, and had confidence in him. There was a strong feeling that he was always moving the case forward and that he was working on our behalf.
The settlement resulted in about $20,000 for each of my children from Eleanor's part of the insurance (They earned it!). After Erik settled the health insurance claims and investigation and legal expenses were paid there was almost $60,000 left for me, Receiving the settlement checks brought closure to a long complicated case. What a great feeling!
David Bjorkquist

Rachel Smith and Josh Tuchscherer were a amazing team!! They fought for me and were kind, caring, professional but most important understanding and made sure my needs were meet. They walked me through every step, explained things in detail even came to hospital to meet with me. I was scared and worried about what the future would hold for me, worried over bills ect. They made sure all my needs were meet and even gave me piece of mind and handled all the bills. No matter how many times I asked same question, forgetting I already ask, they kindly and calmly answered. I feel I was truly blessed with the perfect attorneys and the best people!! Thank you and all who helped!!

After being rear ended while sitting at a stop light, I call Gus Nicklow at Meshbesher & Spence. After 4 years, 2 surgeries, numerous Dr. appt and almost two years of physical therapy, our case settled. Gus and his team were dedicated and worked diligently to make sure that every aspect of my accident was reviewed and that the arbitrator knew exactly what I had been thru. Gus and his team kept me informed of what to expect during the process. Gus made sure that all my questions were answered and was consistent with always following up with an email. Gus and his team promptly returned phone calls and emails. Gus knew I was frustrated during my recovery and always had a positive responds. I felt that Gus and his team were professional, respectful and truly cared about my well-being. The receptions was always polite and courteous no matter how many times I would call in one day. I would highly recommend Konstandinos "Gus" Nicklow and his team and I am very Thankful for their representation in my personal injury case.