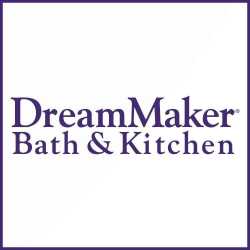 We take the hassle out of home remodeling. We have efficient ways to get our clients into a space they've dreamed about. Our distinctive, full-service remodeling approach focuses on serving our clients from design through installation. Our specialists are committed to delivering a kitchen, bath or interior design, while communicating consistently throughout the entire process. You can feel secure that your kitchen, bath or interior remodeling project will be a fun experience and meet your family's needs.

Where is DreamMaker Bath & Kitchen located?

How big is DreamMaker Bath & Kitchen?

How is DreamMaker Bath & Kitchen rated?

DreamMaker Bath & Kitchen has a 4.8 Star Rating from 35 reviewers.

The is my 2nd project with DreamMakers and it is just as awesome as the 1st. If I had more money and a bigger house, I would come back to them for more remodeling. Their work is high quality and their workers are awesome. Sean completed the job in less time than expected. We experienced a design glitch that would have only shown up when working on site. He provided a good option and worked with us to make it work. He kept the entire workspace clean and neat. He did an amazing job and I love our remodeled bathroom. If Sean is the worker for your project, expect hard work, clear communication, good sense of humour, and great craftsman. Service: Remodelling

DreamMaker was a dream to work with. We wanted to redo our upstairs bathroom but didn't want to manage multiple contractors, deal with getting in the right materials, or even really know what materials were best. DM made it all super easy for us. Our DM designer Kami was helpful, cheerful, organized, communicative, and came up with a beautiful design based on our tastes, and walked us through the process. Our DM contractor, Sean, was friendly and impeccable in his work quality, speed, and professionalism; he was truly impressive. They were both lovely to work with and I would absolutely recommend them.

I am delighted with the results of the remodeled kitchen and two bathrooms that DreamMaker Bath & Kitchen in Ann Arbor helped design and build. My condominium unit is in a former warehouse that was converted to living units almost 40 years ago. Plans for remodeling involved some challenges. The kitchen is part of one large, open (“great”) room with a 16-foot ceiling for a living room, dining room, and kitchen. The “master” (in use, not size) bathroom had a tub/shower with a tub that was never used and had little storage space. Improving functionality and storage were priorities equal to appearance.
The designer, Tiffany Solden, guided me through the design process. I never been involved in a remodeling project before. After learning my priorities and preferences, she broke down the design tasks into a sequence of decisions, each guiding the next set of decisions. She shared ideas, provided samples, and listened! She provided a series of mini-education sessions about sets of choices. That helped me understand and articulate what I liked and would feel like “home” to me. She provided helpful advice at each step, including confirming that an option in which I was interested would be a great choice, commenting that either of two options would be a good choice, and sometimes suggesting that I consider a choice further and why. It took two months. However, I had been guided through decisions big (location of appliances, style and color of cabinets) and small (electrical outlet placement). I understood what I wanted in detail and was looking to having the work begin.
“It takes a village” to remodel. The work on the three rooms was done simultaneously so that the overall project could be completed in less total time. With Lee Willwerth monitoring overall, Matt Calus directly coordinated the work of people responsible for each room. Kyle Davids was assisted by Matt Strahan in remodeling the kitchen, where the location of all appliances was changed to be more functional. Kyle also did the partial remodel of the lower bathroom/guest bathroom (kept the existing tub/shower there). Ryan Jahr did the total remodel of the upper (“master”) bathroom (converting a tub/shower into a shower plus a floor-to-ceiling deep storage cupboard). Jerry Brush handled minor adjustments and follow-up, with Scott Lauffer finishing up after Jerry retired.
Everyone was happy to explain what they were doing, answered questions, checked with me regarding minor details to be determined on site (how high to hang towel bars), and helped make minor adjustments as the construction progressed. I monitored the work and identified a few things that were not done quite as planned. Sometimes they had an important practical reason for varying from the plans and I thanked them. Other times they realized that something was not done as intended. They apologized and made corrections quickly and well.
The COVID pandemic extended the time for the construction to be done. Precautions slowed the work some. More importantly, supply chain issues slowed arrival of some material. DreamMakers updated me at every stage, explained what was occurring, and worked with me to adjust operational plans. Even with COVID delays, construction was done in just over two months. Kitchen appliances were obtained through another source and took longer to arrive. As appliances arrived, DreamMakers personnel returned promptly to install them.
The time spend planning details was important in having the finished product match (and exceed) expectations. After living in the remodeled space, my only “add on” request has been for a small towel bar to be installed behind a bathroom door.
I am extremely happy with the result. Functional use of the kitchen has been meaningfully improved and the clean, neutral design assures that the living and dining areas remain the central focus in the “great room.” The lower/guest bathroom is a “fun” interesting space for company. And the upper/”master” bathroom is a quiet, restful place to start and end the day. Service: Remodelling

Very professional. From start to finish Dreammaker was awesome. Macy designed exactly what we were looking for in our bathroom remodel. Ryan and his crew were awesome. As a working professional in another industry I can say Ryan, Macy and the Dreammaker staff are top notch. Thanks for great results! Thumbs up across the board.

Dream Maker is wonderful. We started working on a bathroom remodel with Macy in March and were so pleased with her design, her professionalism and constant assistance. Ryan and his team executed everything beautifully. The level of detail required brought some challenges along the way and we were so impressed by the whole team. Thank you Macy and Ryan for your hard work.