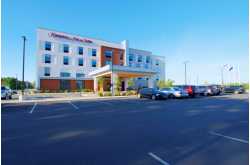 Put your feet up at our new Hampton Inn & Suites Portland West and enjoy close proximity to Portland International Airport and downtown Portland. Just off Interstate 95, we are just minutes from the Maine Mall, several restaurants and local attractions. Explore Portland Head Lighthouse or catch a game at Hadlock Field. Our contemporary guest rooms and suites have everything you need for a restful stay. Sleep well on the clean and fresh Hampton bed, unwind with your favorite show on the HDTV or stay productive with a work desk and chair. Each room includes free WiFi, a coffeemaker, mini-fridge and microwave, while also feature additional space and a sofa bed. Fuel up for your day with Hampton’s free hot breakfast, featuring classic favorites like Belgian waffles, fruit, yogurt and more. Fresh, hot coffee and tea are available around the clock in our lobby, and our 24-hour Treat Shop has all your favorite snacks and beverages. Enjoy a swim in our pool or work out in the fitness center. We also offer a 24-hour business center with free remote printing.

What is the phone number for Hampton Inn & Suites Portland West?

What is the internet address for Hampton Inn & Suites Portland West?

DO NOT STAY! HOTEL HAS BED BUGS!!! My family and I booked three rooms for a one night stay at Hampton Inn & Suites Portland West located at 1210 Brington ave Portland, ME 04102 for the night of August 1st, 2021. We checked in early afternoon. After an hour in accommodating ourselves into room 325, where my husband and I intended to stay the night, we found a mold filled slice of pizza in the mini fridge. We called front desk and it was taken care of immediately. We were satisfied, a mistake can happen and everything else seemed right. What I haven’t been able to withstand is experience in room 325 and the poor professionalism from the staff, which I will explain in the next words in detail. Around the times of 1:30am-200am Monday august 2nd, I wake up from the bed to an uncomfortable warm to hot itchy sensation on my right upper and rear part of her leg, after accessing the hives I saw, we thought it could be bites from insects. We searched the bed and found an insect and a spot. The bites and how the insect look led us to believe it was a bed bug. I then called front desk and what happens next is inhuman and troubling to the Hilton’s image of customer service. My husband spoke with AJ on the phone. AJ was evasive and questioned our judgement, after being explained what happened. In his own words, AJ said, how come we didn’t noticed the bed bugs during the day. I asked for him to come to the room but his answer was he couldn’t leave the front desk. I then requested to speak to the manager. AJ calls me back to the room telephone as we’re getting ready to leave room 325. We did not feel safe staying more time. On the phone with AJ, he expresses no concern as he tells us there’s nothing he can do, he has no more available rooms, he can not accommodate us no where else, we were welcome to stay or leave as we please and the manager comes in later at 3pm. We gathered our belongings and went down to the lobby where we spent the next hour trying to think up a possible solution and outcome for my bites and our stay for the rest of the night. AJ refused my request of work phone numbers and emails of anyone else that could help. In his own words he said Wendy the manager was new and she didn’t have an email and that we wouldn’t call her because she’s home, but at the time of the incident when I called him from the room, he said he had spoken to her about the situation, which I find hard to believe that an hour later from the incident, the manager can no longer be called. I was in pain from the bites, we bought water and claritin (first pack AJ handed to my husband were four month expired) I was hoping that would make it better for the time being. We then left to our car parked at the lot to spend the rest of the morning. The rest of my family were in the rooms. My husband went back into the lobby to request an incident report, AJ creates a theatrical piece where he shuffles some papers looking for an incident report that he never created and no one else could of made because he was the only staff present. My husband went back to breakfast after that. When we came back someone else was at the front desk, a short lady. My husband explained what happened but she also denied help saying she had no incident report and no work numbers or emails to anyone above her. She had me write up an incident report on a paper printer page. My husband left his phone contact information with front desk. It is now Wednesday morning. We haven’t yet been reached for help by anyone at Hilton. I have pictures on the bites on my body, pictures of the bug we found, a video of the room and stain on the sheet, video of the last conversation with AJ, a picture of the incident I was asked to write up. We are in the process of filing a report with the local department of health. We are also in talks with legal representation.

Will never stay at another Hampton inn hotel anywhere for the rest of my life because of this experience. Manager literally tried to fight us, and then watched us leave from the parking lot. my friend wanted to cancel the reservation because he did not like the location. He then proceeded to say how he was going to decline any type of refund from the booking website. He was super aggressive and hostile even after my friend apologized for not wanting to stay there. Horrible management. I’ve never felt so disrespected in my entire life. Please go anywhere else. do not waste your time and money.

The facility was very nice. The arrogant guy at check in will keep me from ever coming back. Too many other options with better customer service.