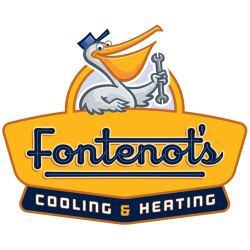 Fontenot’s Air Conditioning & Heating of Broussard, LA is a family-owned and operated air conditioning company serving Broussard, LA, and the surrounding Acadiana communities. Working with his grandfather during the summer, Cade Fontenot learned the HVAC business at a young age. Just as important, he also learned the time-honored values of service, honesty, and skill.

What is the phone number for Fontenot's Air Conditioning & Heating?

What is the internet address for Fontenot's Air Conditioning & Heating?

The website (URL) for Fontenot's Air Conditioning & Heating is: https://fontenotsac.com/

Fontenot's Air Conditioning & Heating has a 4.7 Star Rating from 34 reviewers.

I have been using Fontenot's Air-conditioning and Heating for over 15 years so this review is long overdue. From the owner Cade and his right hand man, Brent, they have always responded quickly and with courtesy and have always solved whatever the problem was. Because of the quick response and expertise in the AC business, when my AC units that were installed originally when our house was built died, it was a no brainer to have them install two new 5 ton Trane Variable Speed AC units. Then when we built our new office in 2019 for our company Wealth Advisors, and even though we had multiple quotes from other AC companies, Fontenot's AC was the only company we really considered to install our three new Variable Speed Trane units.
Today was the latest service call because over the weekend I had water slowly dripping on my bathroom wall and dripping outside beneath the stucco. I called Cade this morning and two hours later, he showed up, detected and fixed the problem within an hour! I don't write reviews often (this is my second) but it was time that I recognize Fontenot's AC & Heating for their outstanding expertise and top notch service they provide. Next time, you have an AC or Heating problem, give these guys a try; you won't be disappointed.