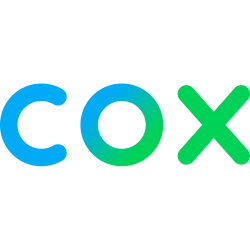 Your Cox Store in 1109 SW Wanamaker Road, Topeka is the place to experience how it feels to live in a truly connected home. Our friendly experts will answer all your questions about Gigablast internet, Homelife home automation, and Contour TV. Demo the voice-activated remote and hear blockbuster sound from the latest in Top Tech audio electronics. Discover, learn, and experience more at your neighborhood Cox Store

What is the phone number for Cox Store?

Where is Cox Store located?

What is the internet address for Cox Store?

How big is Cox Store?

What days are Cox Store open?

How is Cox Store rated?

DO NOT GET COX. This is the worst customer service we have EVER experienced. I work from home and I’ve been without internet for 2 weeks! How am I supposed to work? They only had an installation appointment available a week later and so I was hopeful it would be only 1 day without internet and I couldn’t work. Someone was supposed to come install on Monday 9/27, the guy called and said he can’t do a partial install and doesn’t have the parts for the homelife(we don’t even care about the homelife we seriously just need internet). We moved the homelife to a different date and scheduled for today 9/30 for the internet like the guy told me to do and told me to call him back. The guy that called me said to call him back and he would move install to Tuesday without the homelife because he knew I needed internet with working from home. I have called him 5 times, left 2 different voicemails and texted him…no response. Why tell me to call you back if you won’t even answer or respond? His name is Bryce Bergman I believe. They were supposed to come between 8-10. 10:00 rolls around and my husband gets a text that they are coming. He goes downstairs around 10:20 because he hasn’t heard the doorbell and there’s a note on the door saying they missed us and to reschedule. You didn’t even call us or ring the doorbell! If you rang the doorbell our dogs would have barked and they didn’t, so you were obviously avoiding us. We will be looking elsewhere as this is completely unacceptable. Moving houses and trying to get internet to work from home is already hard enough and you have to make this more stressful than anything else. TERRIBLE!

Over priced cot the cord. Would rate 0 stars if could. Att has better deals

Technician shows up 6 hours late cost me $170 to miss work to be here then charges me $100 for coming out. STAY AWAY money hungry and don't care about there customers.