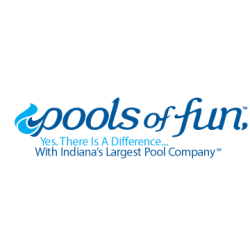 Where is Pools of Fun located?

How big is Pools of Fun?

What days are Pools of Fun open?

How is Pools of Fun rated?

I went to Pools of Fun in Fishers and introduced myself as someone who just bought a house with a pool and needed a lot of help. I basically just went there because I needed chlorine to begin with. The workers there really didn't offer much help outside of telling me how much the chlorine costs. I didn't know any better, so I bought a 12lb bag for roughly $150. Later that day, a pool service company (Leslie's) came by to walk me through the basics of maintaining the pool. When I told him how much I just paid for chlorine, he was surprised. He told me Leslie's was much cheaper. Since I was going to take a water sample for Leslie's to analyze, I looked at how much they charged for the chlorine tablets and I could get a 35lb bag for essentially the same price as a 12lb bag at Pools of Fun. So I bought the bucket at Leslie's and went to return the bucket to Pools of Fun. However, when I got there, the response was 'corporate doesn't like it when we take those back - that's why we post signs about it'. I'm sorry, but that's insufficient. Nowadays there are signs everywhere for everything and nobody is going to read them all. The least they could have done would be to verbally explain to me that they do not accept returns for this, especially after I introduced myself as a new, naïve pool owner. I had only bought this 4 hours earlier and never opened the bucket, but all they could do was shrug their shoulders and point to corporate. Hopefully 'corporate' reads this review and does something about it, because they're a much more convenient location for me, but I will not be purchasing anything else from them if this is my first experience. I do not blame the workers, though I think they should have told me verbally. Regardless, for those interested, you can get 3x the chlorine at Leslie's Pool Supplies for basically the same price as Pools of Fun.

Everyone in the store is very knowledgeable and helpful when it comes to knowing how to keep pool chemistry balanced and healthy. They take their time to explain their recommendations to me and even offer to carry products out to my car for me. Highly recommend!

Pools of Fun have been great to work with since we bought our pool in 2012. In recent years the Manager Lindsey and her amazing team have been wonderful. As any pool owner knows there will be challenges. Lindsey and her team always come through for us. Guiding us through the process so our pool is safe and clean. Awesome is the word I would use to describe everyone at Pools of Fun!!!

We have Had great service and advice at the Fishers POF store. Lindsay is especially knowledgeable and great at helping problem solve issues with Pools. Some of the reviews listed here are with corporate POF. I agree with some of them and have had problems in the past. However, there are some great employees now (namely Lindsey, Daniel, Amanda, and Bruce).