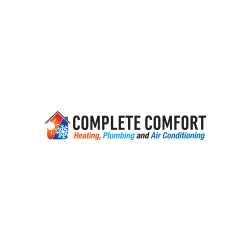 Are you in need of quality HVAC service in Central Indiana? Time to call Complete Comfort Heating, Plumbing and Air Conditioning. With over 15 years in business, an A+ BBB Rating, and three consecutive years awarded the Angies List Super Service Award, their team has the experience and professionalism to give you the services you need at a competitive price. Let their licensed and insured technicians take care of all your issues quickly and effectively.Call Complete Comfort Heating, Plumbing and Air Conditioning today to schedule your estimate. Whether you need help with water quality improvement, heater repair, or air purity, you can count on their team to sell you exactly what you need and nothing more. Their commitment is to customer satisfaction. If you need help anywhere in Fishers, Carmel, or Greenwood, get help from Complete Comfort Heating, Plumbing and Air Conditioning.

What is the phone number for Complete Comfort Heating | Air Conditioning | Plumbing?

What is the internet address for Complete Comfort Heating | Air Conditioning | Plumbing?

No arguments or baloney, just competent, professional service at a reasonable price.

A year or so ago, I called them to do some repair work on my home's HVAC system. The previous installation was completed without installing a filter box, and I had them add one for us. We all knew that the 2+ years of running the system without a filter had caused damage, but I had hope that we'd bought ourselves a few years before that damage caused the system to give out or require expensive repairs.
Unfortunately, I was wrong. On the coldest day of the year, to that point, and a couple of days after bringing my newborn home from the hospital, the furnace gave out. I called Complete Comfort up and they had a tech out within the hour. He got the furnace running again, but told me that it would continue to go out until we repaired it. After hearing the list of repairs needed to get the furnace going and that the system was undersized for the house, I decided to just go ahead and get an entirely new HVAC system.
The next day, Mike was at my house to discuss a new system, and I scheduled an install for their next available date, which was only 2 days later. Steve arrived the morning of the install. He and his team were fantastic, and much to my wife's approval, put on shoe covers and drop cloths where they worked without being asked. Overall, I've been extremely happy with the new system, temperatures in the house have never been more consistent and we've not been this comfortable since we've moved in. Services: HVAC maintenance, Installation

I was contacted within 5 minutes of requesting a quote, they were onsite within an hour, and work was completed by the next day. Totally happy with the service.