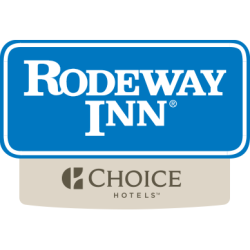 Anyone looking for a hotel that will not break the bank, our Rodeway Inn Evansville hotel is just the ticket. You will get all the basics you need while on the road so you can experience all southern Indiana has to offer. Nearby points of interest include the Mesker Park Zoo, Angel Mounds State Historic Site, John James Audubon State Park, Ellis Park Racing and Gaming and the Evansville Museum. Our hotel has money-saving amenities you want like free WiFi throughout the hotel, freshly prepared continental breakfast each morning and complimentary coffee. Stay fit in the indoor heated pool or check your emails or keep up with work commitments in the business center. And you will always get professional service from our friendly staff and 24-hour reception. No pets allowed.

What is the phone number for Rodeway Inn?

Where is Rodeway Inn located?

What is the internet address for Rodeway Inn?

What days are Rodeway Inn open?

How is Rodeway Inn rated?

Rodeway Inn has a 4.4 Star Rating from 22 reviewers.

Awful experience my wife and I had. We stayed on New Year’s Day for one night and was charged two nights. Not only that the jacuzzi was broken and I told the person at the service desk and he told me he couldn’t do anything about it. I was nice enough to tell him we would stay in that room if only we was charged for a standard room rather than a jacuzzi room. The bathroom area was filthy as well if I must add. The next day is when I realized we were charged for 2 nights and for a jacuzzi room. I’ve attempted to contact the general manager over the last couple weeks with no response.

It was a nice place to stay

Awesome place to be!