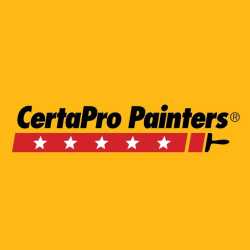 What is the phone number for CertaPro Painters of Atlanta/Decatur?

Where is CertaPro Painters of Atlanta/Decatur located?

What is the internet address for CertaPro Painters of Atlanta/Decatur?

The website (URL) for CertaPro Painters of Atlanta/Decatur is: https://certapro.com/atlanta-decatur/?utm_source=YextNetwork&utm_medium=organic&utm_campaign=YextNetwork&y_source=1_MTIzMDY4MTMtNTQ1LWxvY2F0aW9uLndlYnNpdGU%3D

How big is CertaPro Painters of Atlanta/Decatur?

What days are CertaPro Painters of Atlanta/Decatur open?

How is CertaPro Painters of Atlanta/Decatur rated?

CertaPro Painters of Atlanta/Decatur has a 4.9 Star Rating from 176 reviewers.

We are very pleased with the outcome of this project. The proposal by Alex was very thorough and detailed. Jerome, the project supervisor was very responsive, professional and delightful to work with. The members of the crew were proficient and skilled in both painting and repairs. We were contacted several times by the owner) manager to ensure that the job was going to our liking. We highly recommend this company. Services: Exterior painting, Water damage repair

When we first scheduled our appointment, the customer service was amazing. Ben was very vocal about pricing and an estimate date on when services could be completed. Shortly after, we scheduled an appointment for 2 weeks after the visit. The day that Certapro was scheduled to come, they sent an email saying they are still working on the project proceedings and they needed to push out the date. It was VERY inconvenient as I scheduled everything around this specific date, so we were patient and told them it was okay and we would have to push it out to the following Monday due to me going out of town. The following Monday comes and they do the same exact thing! Samell emails me and said that they are STILL working on the same proceedings and she will let me know when they wrap things up. So now, not once but twice I have to inconvenience myself and my work schedule due to their delays. After, she then emails later Monday afternoon saying the could come out Tuesday to get started on the work.
Tuesday comes and The company does not call before arriving, they just show up. Mauro, which was the supervisor of the project was helpful and we did a walk-through for me to make sure they would paint everything that was expected in the contact. The 2 painters they had assigned to the project I tried to communicate with multiple times, but barely spoke English so I just let them start the work. 3 days later, they finish the project Thursday afternoon. Initially, I thought we were supposed to do a final walkthrough just to make sure I was satisfied with all of the staff which didn’t happen. I did the walkthrough myself and honestly the paint job looked like something I could have got someone off the street to do. Some areas had spots and I had to go back to tell the painters areas they needed to go back over. It was was their job to do a walk before I even walked the house. I was very disappointed with the service as I chose this business based off the reviews I’ve seen on google, but my Fiancé and I were not impressed. That was 3,000 dollars wasted and I will not recommend their services to ANYONE.
Thank you Ben and Mauro as you guys were great.
Best,
Destiny
*Update- The owner reached out about the concerns with the project, and was very apologetic with the inconvenience. He insisted on fixing the work, and we appreciate his desire to fix everything we were concerned with. We still decided not to go with any more projects, but he least offered us a credit for the inconvenience which we appreciated. Thank you for taking the time to reach out and fix the existing issues we had.