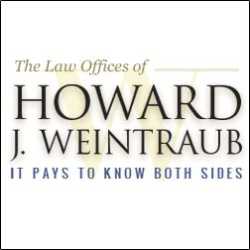 An Atlanta criminal defense and DUI attorney from the Law Offices of Howard J. Weintraub, PC can provide a vigorous defense on your behalf if you have been charged with a state or federal crime. Backed by more than 40 years of combined experience, the team has the skills you can trust to defend your rights. The lawyers work diligently during each step of their clients' cases to get the best possible result.

What is the phone number for Weintraub & Alper Legal?

Where is Weintraub & Alper Legal located?

What is the internet address for Weintraub & Alper Legal?

The website (URL) for Weintraub & Alper Legal is: http://www.ga-criminaldefense.com

How big is Weintraub & Alper Legal?

How is Weintraub & Alper Legal rated?

Weintraub & Alper Legal has a 4.7 Star Rating from 80 reviewers.

My family and I can’t thank Howard and Ben enough for what they have done for my fiancé. After being mis represented and treated horribly by our previous attorneys I prayed and prayed for God to lead and guide me into the right direction to find someone to treat us fairly and represent us in the way that we should be. After several days of research and prayer God led me to Howard and after the first conversation with Howard I knew that we were in good hands. I felt it in my heart and spirit that God sent Howard and now I could finally breathe.
From day one of Howard and Ben being on our case they immediately hit the ground running and began working and getting things done within hours that were previously never accomplished from our previous attorneys that had been on our case for 5 months.The mandatory shutdown/ quarantine at this time had no affect on Howard and Ben putting their best foot forward and working relentlessly even while the rest of the world was on pause. They effectively communicated with us and walked us throughout every step of our case while making sure that we were informed on every single detail . We didn’t feel like we where just another client, or just another number they treated us like we were family they actually cared about us and it showed.
After working on our case non stop and preparing for trial all of a sudden I received a call from Howard and Ben that literally brung me to my knees with tears of joy. Howard and Ben informed me that all charges against my fiancé were dismissed. Let me repeat all charges were dropped on a case with charges that mounted up to 20 plus years and immediately on the same day my fiancé was released after serving 15 months in the county jail. Howard and Ben were preparing for trial to prove his innocence however without ever having to step foot in a courtroom the charges where dropped. I will tell you there is no doubt in my mind that the only reason that my fiancé wasn’t released sooner was due to having a probation hold and being incarcerated during a pandemic while awaiting trial. Without these unforeseen circumstances I know without a reasonable doubt that my fiancé would have been home even sooner with Howard and Ben on our side. The greatest reward was having my family back, seeing my 3 year old yell “that’s my daddy”, and the smiles on all of our kids and families faces were priceless. I can finally breathe again, the pressure is gone, no more sleepless nights, stress, and tears.
If you are looking for someone to represent you look no further I promise you choosing Howard and Ben to represent you will be one of the best choices you will ever make. Thank you Howard and Ben my family and I can’t express our gratitude enough and I promise you from the bottom of my heart we are forever grateful. I thank God for blessing us to be represented by you!!!! Thank you!!!

Howard and Ben got results. Direct, yet compassionate lawyers. No surprises. Everything that could possibly go wrong, or right was explained at our consultation. Pat, the administrative assistant was always available for discussion. I highly recommend this law firm.

Howard is a dedicated attorney. He helped me with a case over 15 years old that was never fully handled. My attorney who was originally on the case had passed away. The judges and everyone involved in the court system had all retired. Howard had to do some digging and at the same time persistently follow up to find a resolution. Covid created many challenges as most of the courts were in remote mode only. He promised me in the beginning he would find an acceptable resolution and he did. I would use Howard for any of my legal needs in the future!

Atlanta criminal defense lawyers Howard Weintraub and Ben Alper represented me in a legal matter that I had in Georgia. I am extremely pleased with the outcome that they achieved for me. Attorneys Weintraub and Alper are very knowledgeable and experienced trial lawyers. They both were accessible by phone seven days a week, including on holidays, and they frequently advised me of the developments in my case. Their strategy as to what they hoped they could achieve for me was the exact outcome that was reached at the conclusion of my case. I strongly recommend Atlanta lawyers Howard Weintraub and Ben Alper to help anyone who needs strong and effective legal representation.

I cant even describe how much of an amazing job Howard Weintraub did, I had a situation that I didn't know what to do or who to turn to and when I called Howard Weintraub ,not only did Howard handle my case but Howard treated me like I was his own son. It didn't matter what time I called or text him Howard always picked up the phone and delivered results better than I could of ever possibly imagined. My advice to anyone having any sort of legal issue big or small call Mr. Weintraub. He will treat you like family and go beyond any expectation that you could ever possibly have for legal representation, when you need the best of the best this is who you need to call.