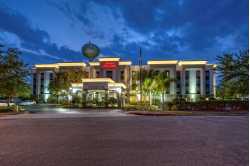 The Hampton Inn & Suites Clermont, FL hotel is located in Florida's ''gem of the hills'', Clermont, a quaint town with unique shops, rolling hills and beautiful lakes. The hotel is only 15 minutes from Orlando and Walt Disney World, 20 miles from Universal Studios and Sea World and 10 miles from the Florida Auto Auction. Our Clermont Hampton Inn & Suites hotel is a four story, interior corridor property which has an outdoor pool, exercise facility, business center, complimentary newspapers, complimentary hot breakfast and complimentary high-speed internet. Each of our beautiful spacious Florida hotel rooms contains all the extras you will need. It's our goal that your visit to Clermont, whether for business or pleasure, is a most enjoyable experience. We believe in going out of our way to make you feel at home in our home. We are Clermont's newest hotel with the oldest set of values... our customers come first. We love having you here in Florida at the Hampton Inn Clermont hotel!

What is the phone number for Hampton Inn & Suites Clermont?

What is the internet address for Hampton Inn & Suites Clermont?

The website (URL) for Hampton Inn & Suites Clermont is: https://www.hilton.com/en/hotels/mcocmhx-hampton-suites-clermont/?SEO_id=YEXTN-HX-MCOCMHX&y_source=1_MjA4MzEwNS01NDUtbG9jYXRpb24ud2Vic2l0ZQ%3D%3D

Hampton Inn & Suites Clermont has a 4.5 Star Rating from 426 reviewers.

In short, DO NOT STAY HERE IF AT ALL POSSIBLE. It is not a safe place to stay. Your vehicle MORE THAN LIKELY will get broken in to.
Detailed version:
This hotel was a horrible experience. First and foremost, the security around the grounds and parking lot it sub par. There are ZERO cameras in the parking lot which the thugs around the area obviously know. I am here with a group of people. Out of this group, one person's truck was backed in to and has a huge dent in the tailgate, one person's tool box was opened and items stolen out of the tool box and my truck had the window busted out and several items stolen out of it. All on different occasions. I WOULD NOT park ANYWHERE near the back and I WOULD NOT leave anything I valued in my vehicle. It WILL get stolen. If you do.. Take a picture first so you can provide a copy to the police when you do the report. The worst part is.. there is NO safe or anything in the room to put any valuables. Did I mention there are no camera's at this hotel outside at all? The hotel staff are aware of the issues and claim that it isn't their problem. In my opinion, they should do everything in their power to ensure their customers vehicles are safe. Simply adding camera's would deter the thefts.
Now for the rooms. The rooms are sub-par at best. I'm not a complainer but dang. The refrigerator is super small and the microwave is literally smaller than my daughters toy one. Also, there is very little storage to put your clothes. You can hang 3 or 4 shirts and there is 3 little trays to store items in. I was honestly shocked. Literally the first hotel room I've ever stayed in that doesn't have drawers. I spoke about the safe earlier. There most definitely needs to be one added to every room. With the reoccurring issues in the parking lot, you need somewhere to store your belongings.
As for the staff, MOST of the staff are very nice. Today, a friend of mine posted a review about the hotel. About 10 minutes later, the Female Manager, I believe her name is Katerina, called him in reference to his review. He told her his concerns with the hotel and this appeared to upset her. I could hear her literally yelling through the phone at him about his review. He told her that was his personal opinion and that his review would not change. This ended the conversation. A few hours later, my friend gets a call from our boss. He advises him to check out and return home. When asked why, he was told that there was an issues with him and the hotel staff. There were several people present for this conversation. There was NO issue. She just didn't like the review. I think that is absolutely unprofessional at best and hope that someone, somewhere that matters reads this and rectifies her actions.
In closing, I would not recommend staying here. IT will cost you MORE to stay here than to stay elsewhere with better security. I've lost a window, and several hundred dollars worth of items, my coworker has serious damage to his truck and another coworker had items stolen out of his truck as well. These are all different incidents. Did I mention that the police said this happens all the time? THERE is your sign.

The rooms are laid out strangely. There is no dresser for clothing. The building is poorly constructed. When hurricane Eta passed by recently the ceiling in my room (and in several other places around the hotel) started dripping water and little pieces of the ceiling started falling down on the floor.
The breakfast being offered is straight up lazy, if you don't want a bowl of cereal or a coffee without real cream then you're out of luck. The fitness center is way too small and does not have adequate air flow for even a 30 minute workout. The pool is a glorified bathtub.
Might as well go somewhere a little cheaper because you don't get any more bang for your buck here even with prices nearly $100/night.

Nice rooms, poor customer service. I was traveling with my company and they asked me to hold my room with both a company card and my personal credit card. Meanwhile the person in front of me was told oh your company card is on file so you’re good. I work for a very large and well known company in the US. Definitely will be calling corporate.

Rude Carolina
Hilton and American Express developed a program in appreciation to healthcare workers available for us. But apparently this worker person named Carolina called me and states, it could be used for 1 person only. That is not true, first of all that was actually the reason why Hilton Honors allowed us to book even 2 adults per room at no charge.
I believe she was not happy that Hilton Honors healthcare workers. So she decided to canceled my booking. I love Hilton but I’m so disgusted and disappointed about this employee who obviously dislike healthcare workers.
Never before I was treated like that from hospitality person. I hope Hilton managers can read this and take action because Carolina act totally against the Honor Healthcare workers program I believe on her own.
To add some that was booked trough an association approved and welcomed by Hilton Honors as they did to us. Thank you Hilton but completely disappointed at people like this employee named Carolina. Apparently for her healthcare workers shouldn’t be appreciated as Hilton tried.
Nice day

I did not stay at this hotel. I am currently a student at the Rosen college of hospitality and I had an assignment to look into ADA compliant rooms and to take a few pictures. My fellow classmates have done this to many other properties and had no problem. The lady working at the front desk did not greet me when I walked into the door and told me “no we probably don’t let people do that since it’s private property” I asked to speak to a manager. She went behind the desk for about a minute and told me no the manager said that the pictures are online. They are not. I’m pretty disappointed with this situation since I have stayed here personally a few times and never had a problem it’s a shame they couldn’t just let me take the 5 pictures of an ADA room for a website for disabled guests to look at.