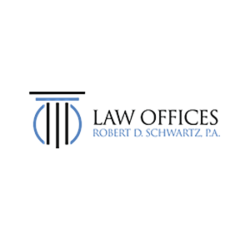 Established in 1996, The Law Offices of Robert Schwartz have prepared more than ten thousand revocable trusts for satisfied clients. Through hard work and commitment to principle and just outcomes, Robert has grown his practice to twelve locations throughout the state of Florida and has added several trusted attorneys to his staff during his twenty-five years of service to the community. By adding attorneys with other areas of expertise under its umbrella, the firm has been able to offer a wider range of services. Besides revocable trusts, The Law Offices of Robert D. Schwartz employ expertise in real estate, elder law and living wills and trusts. If your need applies to Florida estate law, Robert Schwartz and his team are expertly trained to attain the best outcome for you and your family. Your satisfaction is our biggest concern. Let us work hard to earn your complete trust and confidence.

What is the phone number for Law Offices of Robert Schwartz, P.A.?

Where is Law Offices of Robert Schwartz, P.A. located?

What is the internet address for Law Offices of Robert Schwartz, P.A.?

The website (URL) for Law Offices of Robert Schwartz, P.A. is: https://www.schwartzpa.com

How big is Law Offices of Robert Schwartz, P.A.?

What days are Law Offices of Robert Schwartz, P.A. open?

How is Law Offices of Robert Schwartz, P.A. rated?

Law Offices of Robert Schwartz, P.A. has a 4.7 Star Rating from 21 reviewers.

Robert Schwartz is a very capable attorney.He listens to you,and offers the best advice for a smooth outcome.I would highly recommend him for all your estate needs.

Great service and helpful staff. 10/10 would recommend to a family or friend.

After numerous cancellations and rebookings we finally got aq appointment. in the Boca office, The access to this office is not good for anyone with a walking or mobility disability- We had advised of this and they did not advise or were even aware. When we arrived we waited about 15 minutes as she was running late. J had a problem getting out of the lobby seat so I went in. She advised she did not feel comfortable doing a will for J or even mine due to J's disability. She did not even come out to meet him to find out if there would be issues. I advised he had a speech issue. This is not uncommon with people who have had an anesthesia injury. She was not willing to help us or even me until I pushed it. She said she would have to ask her boss and rebook. I said what was I going to do now and she responded " you should have thought of this before this happened. We had wills we just needed some very simple revisions. She took notes and made no copies of the documents. Obviously never intending to do any work for us. I asked if ai could put burial desir4es in the will and she said just buy a plot pre need. What an assumption to make. I do not feel Haley Weiss acted in accordance with diligrence and in a professional manner. I would expect an apology. When her " boss" called he asked for a physicians statement of competency for J- He never met him- neither of them had met him. He did offer some accommodations if we opted to come back but did not say anything about her behavior or attitude. He may be a fine lawyer but I cannot recommend Haley Weiss for any situation that is not simple and straight forward. I would expect an apology from her.I would direct her to chp 4 rules of professional conduct-In all professional functions a lawyer should be competent, prompt, and diligent.I see all the good reviews. Perhaps she was just having a bad day.