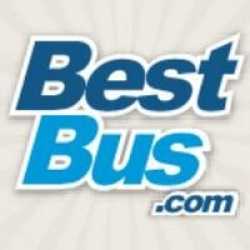 BestBus (formerly DC2NY) is a company that operates low-cost intercity bus service in the Mid-Atlantic states of the United States. The service operated by BestBus runs from various stops in the Washington, D.C., New York City, Virginia and Delaware. Book BestBus for an easy and comfortable trip! Call 1-866-687-9208

What is the phone number for BestBus?

Where is BestBus located?

What is the internet address for BestBus?

How big is BestBus?

What days are BestBus open?

How is BestBus rated?

BestBus has a 3.9 Star Rating from 16 reviewers.

( 16 Reviews)
Write A Review
nsd reddy
The Most Tigh

How does a bus that leaves sooner arrive at the same time as a bus that left 2hrs later??? Only bestbus can master that. You purchase an express ticket and it still has 2 stops. I have experienced this on multiple occasions with bestbus and I have had it, never again.

Ramos is the best driver! Safe, funny and on time.

Do not use this bus service!!! Their customer service is extremely rude to their customers!!
I made a round trip reservation, and when I needed to reschedule I put my seats on hold. I was under the impression that my entire reservation was put on hold, so when I went to reschedule (less than 2 months later) it was only allowing me to reschedule my departure and not my return. I called customer service trying to figure out what happened, and apparently only part of my reservation was placed on hold and the other remained active (where I was considered a no-show).
The customer service lady would not even listen to allow me to explain my position and the fact I had never used the service before so I was completely unaware. She continued to interrupt me, talk over me, and raise her voice refusing to allow me to explain. I have never in my life experienced such poor customer service!!
I have sent a message to management - really hoping they can resolve this problem.