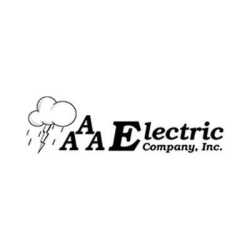 What is the phone number for AAA Electric Co., Inc.?

What is the internet address for AAA Electric Co., Inc.?

The website (URL) for AAA Electric Co., Inc. is: https://www.electricianlongmont.com/

Terrific professional service. The guys arrived promptly, assessed the situation, fixed everything, no fuss, no bother, all done. I couldn't be more pleased. Have lived in Longmont 21 years and have used AAA Electric any time I needed the service and they have consistently been the best.

Very positive experience! The work was done in a timely manner and the two gentlemen were very efficient and professional. Would definitely use AAA Electric again....great customer service from Dale!

These guys did a fantastic job on my building. 3 years later and no problems with anything. Highly recommended

Had a new garage and addition wired by AAA electric in Longmont. 8k worth of work done, initial work was fine but one electrician called in a few days in a row when I had taken off to accommodate letting them in and answering any questions, but my wife had to take time out of her day to address letting them in and answering questions which is difficult when she works from home and most of her work is in calls. Had an issue after the work was completed some interior garage lights, garage door opener and exterior lights stopped working. Called twice and was told someone would be out after each call but no one ever showed. My wife finally called and talked with one of the owners and he said if he could not get someone out he would come out himself which is what happened and everything is working now. Would have liked a little better communication but for the most part everything went ok. I feel like texting could be a great asset to use in the future for AAA electric. Would recommend but with the above caveat. Services: Remodelling, Panel replacement or upgrade, Roadworks