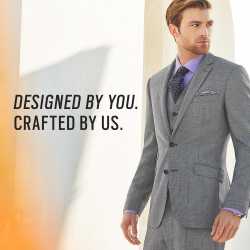 For more than 40 years, Men’s Wearhouse has been supplying men with high-quality, affordable designer apparel including suits, dress shirts & sportcoats as well as tuxedo rentals and clothing for big & tall. We help men love how they look!

What is the phone number for Men's Wearhouse?

Where is Men's Wearhouse located?

What is the internet address for Men's Wearhouse?

How big is Men's Wearhouse?

What days are Men's Wearhouse open?

How is Men's Wearhouse rated?

Men's Wearhouse has a 3.9 Star Rating from 70 reviewers.

I stood at the door for about 5 minutes and was never greeted. I then walked into the store and the employee was more interested in organizing the shirt racks. I had to initiate the greeting. We were there to try on a tux for a potential wedding rental. We were told that they only had standard things to try on and that they were low inventory. I told them of the suit I was interested in and they pointed to one suit saying that this was the suit. I told them that it was incorrect because the tux did not have black lining, they then said they must not have it in the store. I was told that they don’t have anything similar in the store to try on. However, if we place the order, we will get the shipment sent to the store 2 days before the event and can try it on then. I told the employee that I’m not comfortable waiting 2 days before a big event to see what a tux looks like on my groom. I was then told that that’s how they do rentals. I will take my business elsewhere where they will hopefully be more interested in the customer.

They take care of you there. You'd have to try really hard to leave there looking bad.