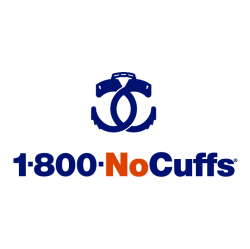 1-800-NoCuffs is known nationwide for our DUI defense as well as providing criminal defense and post-conviction relief at State and Federal levels. As California’s largest DUI defense firm, we offer the resources of a large law firm with the individual attention and compassion of a smaller firm. With offices throughout the state, 1-800-NoCuffs can handle cases in every court in California.

What is the internet address for 1-800-NoCuffs?

For a company that prides themselves on keeping you out of handcuffs they do a terrible job, in fact, they did the complete opposite and was the cause. They dont like to keep tabs on your case. The lawyer I got through them did not pay attention to my case and looked at my case over 2 weeks after my arraignment so I got a warrant. Also, for some reason they would speak only to my mother about promises and costs. Then when I asked about them, they seemed to have no recollection about it, even though they were representing me and I was paying them. ALSO, I dont know if I had gotten "the new guy" but the deal that he got me, that he swore up and down was the best that I could get, was terrible and he used none of the things I gave him to help my case, which I found out from another firm that I could have gotten a lot better deal using what I had provided him. I just wish I had known all of this when I contacted them, I would just used the one the courts give. Would have had a better deal and a better lawyer.

I spoke to many lawyers before these guys and for more than a minute no one would even talk to me. Everyone wanted to get paid first and hear my case later. Typical. Kavinoky was different. They took the time to listen to me and make suggestions about my case and different ways to approach it. I'm so happy I called. Thanks to the law firm of Kavinoky.

A colleague, in need of a criminal justice attorney, directed me here. It was a very nice person who answered the phone, talking me through the specifics and the whole operation and what to expect. Hopefully you never need this type of attorney, but if you do, you'll understand how comforting it is to have somebody guide you through what to expect every step of the way. The peace of mind I got from working with NoCuffs was worth every penny.

My crime was dismissed by a lawyer at Kavinoky Law Firm. Thank you.