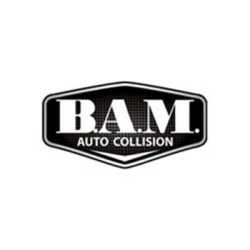 What is the phone number for B.A.M Auto Collision?

Where is B.A.M Auto Collision located?

What is the internet address for B.A.M Auto Collision?

The website (URL) for B.A.M Auto Collision is: https://www.bamautocollision.com/

How big is B.A.M Auto Collision?

How is B.A.M Auto Collision rated?

B.A.M Auto Collision has a 4.6 Star Rating from 39 reviewers.

I had a great experience at B.A.M. They Recently worked on my 2014 Subaru crosstrek. They worked directly with my insurance, and made sure all the necessary repairs were completed. Basil was friendly and communicated with me through every step of the process.I would highly recommend them to anyone!

I was originally referred to an Allstate approved place however after good review from the towing place I chose here. He was very pleasant and eager to help. The repairs took a while longer than originally planned, but he made my doors like new. He went above and beyond too. He fixed a few minor things that were broken or breaking and fixed them at no charge to me. He also was willing to help with the deductible which would have made a big difference had it not been covered by my insurance. Because both parties have allstate the deductible is waived. But he also covered the rental costs associated with the longer time it was there. Awesome!! There was also an issue with my battery from sitting so long, which he replaced under the warranty I had it under when I bought it. Overall I'm satisfied with the repairs and the look after completion and happy those irksome little things are fixed! Thank you

The people here worked with me on a level other collision centers would not even get close to. Very respectful and nice. I’m very satisfied with how things work here. Definitely will come here for any car collision related problems!