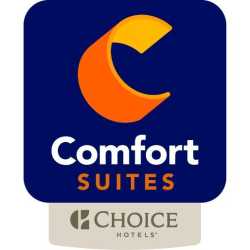 The well-being of guests is top of mind at Choice-branded hotels. Guests may experience a variety of new, improved cleanliness protocols and products. Get rested and ready for anything at the Comfort Suites hotel in Conway, AR near the Beaverfork Lake. Our smoke-free hotel is also near the University of Arkansas, Cadron Settlement Park and Lake Conway. Whether traveling for work or leisure, take advantage of amenities like free breakfast, free WiFi, access to an Internet-connected computer, a meeting room, an exercise room, a free weekday newspaper and copy and fax services. Spread out in your guest room, featuring a flat-screen TV, hair dryer, coffee maker, desk, microwave, pillow-top mattress, refrigerator and an iron and ironing board. Also, earn rewards including free nights and gift cards with our Choice Privileges Rewards program.

What is the phone number for Comfort Suites?

Where is Comfort Suites located?

What is the internet address for Comfort Suites?

How big is Comfort Suites?

What days are Comfort Suites open?

How is Comfort Suites rated?

Comfort Suites has a 3.9 Star Rating from 374 reviewers.

I reserved a whirlpool room for Fri & sat night, after arriving (I called when I booked online to confirm the room's amieties & the day of to confirm when my card would be charged, explaining that $104 had been chargrd to my card earlier in the day.)it was explained to my by the girl behind the desk (unnaturaly dyed hair & several face piercings, who we waited on for several minutes while she was not at the desk before she realized we were there) that our reservation had been messed up in the computer & she was in the process of cleaning what would be our room (check in was at 3, I told them we were be there between 5 & 6, after I got off work).
Also, at this same time two people came up (from inside the hotel) complaining of dirty rooms (not cleaned, bed not made, what "looks like blood on the carpet").
After helping those two gentlemen but before she could help me further she said she had to go outside to smoke, it had been a busy day (I'm temporarily disabled...confined to a wheelchair & was currently on crutches while checking in).
After returning, she explained to me that the booking site had messed up and it showed in their system that I reserved a room for Thurs (I showed her my several forms of confirmation for Fri & sat night as it was my birthday weekend).
She also explained thus is why my card was charged a $104 fee, a no show fee, stating they noticed this and was in contact with her manager to fix it.
During our conversation I asked if they had a comparable room (as there was a reason I selected the whirlpool room)& she explain they were fully booked, the only room available was a regukar queen size bed room. I asked the price difference (trying to stay at this hotel & still didn't get a clear answer, after asking three times) between the room I reserved & the room she was trying to give me. During the process she only texted her manager as they "were extremely busy". The girl behind the desk started to be apologetic, offering a "serious discount" due to this mix up, after asking what they could do and her speaking with her manager about it...the best they could do was a 20% "due to the increase in rates for the weekend" & that ended up being about $1.50 off of each room.
I said no thank you, we would go somewhere else after all that & that's the best they can compensate with ( I'm still waiting on the $ to be refunded to my account...)

One of the worst hotel experiences of my life. First room when we checked in, the doors lock was not working not allowing us in. Finally, after getting into the room the toilet had a note saying “no good”. Guess the staff didn’t fix it from the last guests stay. We then we’re moved to another room. Where the AC unit went out the second night of our stay. The worst part is the “full hot breakfast” from 6:30-9:30AM. This consisted of one microwave with microwave breakfast sandwiches and assortments of single cups of cereals or oatmeal. With a small fridge with milk, apple juice, and yogurt.
My girlfriend booked this hotel, she had stayed here before. She said it has gone down hill since she last stayed and it truly shows. Will not make the mistake of staying here ever again. Spend a little more, get a much better hotel than this one.

Very disappointing stay. We had a room with a King bed and pullout. There was no blanket on the bed, only a light coverlet. There was no bedding for the pullout, only pillows. We had to request a remote for the TV, and the box was not hooked up. There were no wastebaskets in the room. The first towel I pulled out was holey and threadbare, with stains in the middle. In the breakfast room there was a mess under every table. We usually choose Choice hotels because I have dietary restrictions but can eat a hot breakfast. Because of Covid (understandably) everything was packaged, but all that I was able to eat was a small cup of yogurt. Every other option contained gluten.

If you are looking for a clean place, keep driving. The reservation was booked through the choice hotel app (the app I have used for 83 nights stay this year alone). When I arrived, I had to argue to get the type of room I reserved and had proof of. When I got in the room, there was standing water in the bathroom (enough to use a whole towel and squeeze it out in the tub). The surfaces of the room were dirty and there was a half of a muffin still in the microwave from the last tenant. I expect better from Comfort Suites!

Most of the time comfort suites is really nice. However the one in Conway was an absolute mess! I will not be going back to that one. We're platinum members and these are just a few photos of some of the things that stood out in our room! Not including coffee maker was so dirty I had to wash myself, sheets were not fresh at all. AC acted up all night. The stay absolutely sucked, but we checked in after a ball tournament so it was to late to do anything else. Note: we had room reserved 2 days in advance.