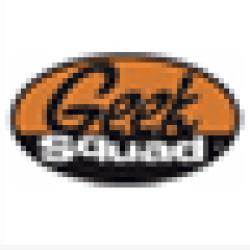 Our Agents provide repair, installation and setup services on all kinds of tech at more than 1,100 Best Buy stores – including computer & tablet repair, setup and support, TV & home theater repair, car stereo & GPS installation, cell phone repair and home appliance repair. We fix most makes and models, no matter where you bought them and can show you how to get the most out of your technology.

What is the phone number for Geek Squad?

Where is Geek Squad located?

What is the internet address for Geek Squad?

How big is Geek Squad?

What days are Geek Squad open?

How is Geek Squad rated?

Geek Squad has a 3.8 Star Rating from 21 reviewers.

3rd time to get my Quick Books switched from my old computer to new one. Bailey was great! But Geek Squad stayed with it until it was right.

They were absolutely useless!

Geek Squad was originally formed in 1994 and the agents were providing quality technical support by going around on a bicycle. The agents were easily identifiable by their badges, black pants, white shirts and also the signature Geek Mobiles. In time, the Geek Squad as a company became extremely successful because of being responsive and providing quick and professional service in the US and Canada. As a result in 2002 the Geek Squad became a part of Best Buy and in 2004 it expanded its services beyond its computer tech origin in order to help out with everything from appliance repairs to car, home theater and smart home installations. The Geek Squad agents make up one of five roles within Geek Squad and their uniform varies by the type of service the agent provides.