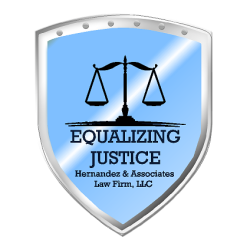 Our office is located inside Mid-Towne Works in Midtown Mobile at the corner of Old Government Street and Airport Boulevard, near the cannon. Due to Covid19, our office is following CDC guidelines and we request that all of our customers wear a mask when entering our office. Here at the Hernandez & Associates Law Firm, LLC, we strive to equalize justice for our clients in all of your legal needs. No case is too big or too small! We are a team of legal advocates who believe that everyone deserves an equal opportunity in their pursuit of justice.

What is the phone number for Hernandez and Associates Law Firm, L.L.C.?

Where is Hernandez and Associates Law Firm, L.L.C. located?

What is the internet address for Hernandez and Associates Law Firm, L.L.C.?

The website (URL) for Hernandez and Associates Law Firm, L.L.C. is: https://www.equalizingjustice.com/

What days are Hernandez and Associates Law Firm, L.L.C. open?

How is Hernandez and Associates Law Firm, L.L.C. rated?

Hernandez and Associates Law Firm, L.L.C. has a 3.8 Star Rating from 13 reviewers.

I live in Decatur, AL which is at the whole other end of the state from where their firm is located, but I googled and researched the best lawyer in the state of Alabama that handled cases involving bullying within the school systems and also cyber bullying. I needed an Education Lawyer that knew the laws, had previous experience in being an educator themselves, and had extensive knowledge in dealing with this type of case and I found it in Christine Hernandez!! We had our first consultation today (9/21/21) through just a regular phone call but Christine right away made the call/consultation feel as if we were in her office setting! She made me feel good about the outcome of my case right away! She was very straight up and honest with me and the one thing that I liked the most, is that after discussing the case with her I didn’t have to ask HER what I needed to do.. she told ME! When we hung up I wasn’t left with unanswered questions or feeling lost, like where do I even begin?! We came up with a game plan and a tentative schedule to follow so that she would have the proper documents to fully be able to represent me and increase our chances of a better outcome of winning our case. Christine is a GOD send!! Looking forward to having her represent me! Best personable attorney I’ve ever came across.

We had a great experience with this office. Everyone was very nice and accommodating. Mrs. Hernandez was amazing. She went above and beyond to make us feel protected and reassured. She definitely cared about our family. Highly recommend!!

Waiting on a call back from firm

I was lucky enough to never have to hire Ms. Hernandez, instead my husband and I (and our former business) were sued by her, her wife and daughter over a deposit paid for wedding catering.
We met her adult daughter, Haley, months before her wedding and she and her fiancé decided to book us by paying a standard $500 deposit. Then at about three months prior to the wedding, we received a call from her coordinator explaining they were “$10k over budget” (that’s about $6k more than the catering even cost) and needed to “cut the menu in half” assuming it would cut the bill in half (it doesn’t work that way though). We explained repeatedly that the new menu would not be enough food or variety for her high guest count, but that there were definitely a few items like an oyster station, carving station and s’mores station that could be taken off to lower the cost. The coordinator asked us to keep everything as-is while they decided what to do.
Another month went by, and we were informed they had decided to use a different (cheaper) caterer and demanded their deposit be returned because “she’s an attorney and we don’t want to mess with her”. We explained again that deposits are nonrefundable despite the constant bullying (including smearing our business repeatedly on social media), especially in the case of simply changing your mind two months before the wedding. Ms. Hernandez herself then came to our business unannounced and demanded that our kitchen staff write her a $500 check that very moment. The owner was called in to speak with her personally, but she was only concerned about letting us know she was an attorney and that we had no right to keep her $500 deposit (even though our invoices were in Haley’s name). When we refused to do so she immediately said she’ll see us in court and left in anger.
The court date finally came after Ms. Hernandez postponed it several times. And wow. Just wow. It was absolutely entertaining and mind blowing watching her yell, text and slouch throughout the entire trial. She even had to call Haley to come in because she didn’t think it was necessary for the adult who booked us to be there. We did end up losing over a small technicality- her wife whom we had never met or spoken with signed the deposit check therefore it was “her” money and not Haley’s regardless of the invoices.
But, the outcome of our trial aside, she was truly an embarrassment to any and all attorneys. She acted extremely childish and entitled from the very beginning which is rich coming from someone who couldn’t afford nice catering.
BE WARNED! DO NOT USE HER UNLESS YOU JUST WANT THE ENTERTAINMENT.