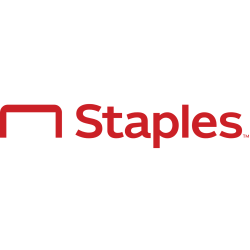 What is the phone number for Staples?

Where is Staples located?

What is the internet address for Staples?

How big is Staples?

What days are Staples open?

How is Staples rated?

Staples has a 3.8 Star Rating from 46 reviewers.

I came in to get a printer. I knew relatively what I wanted, but still could've used some guidance. The two cashiers were just talking. I walked in, looked at them, they both looked at me, didn't say a word. I walked around the printers for 15 minutes. I saw so many sold out which was understandable. Apparently the only 3 other employees in the store were at the copy center, 1 tech guy that couldn't pull himself away from an old guy, and another setting up a display. I know the last two saw me, because they looked right at me.
I left because nobody bothered saying a word, and the lines were really long with people picking up orders. I also would need help getting a printer into my car that I really wanted.

I came to print something with a usb and I needed to change the font size so I asked the lady that was there if she had a computer that I could use and she asked why. She said that there were no computers I could use. I left very mad because it was for a project I have tomorrow and I needed the papers, but I ended up leaving with no benefit.

Really like the store layout. Different than other Staples. Great supply of cleaning supplies for office and home. One doesn't realize there convenient location adjacent to Lowe's.

Not really great on customer service. Every time I come here they’re unhelpful and want me to figure everything out on my own. Also there is almost always a long wait to pick up or print off anything.